These water-based creatures were normal Piranhas that had been exposed to the t-Virus.

They were bred to be fighting fish and were used by Javier Hidalgo as death penalties against traitors. They were encountered during Operation: Javier by Leon Kennedy and Jack Krauser.

Compared to the Neptune, these had small improvements, namely that they could glide on the water, and were able to survive for a time on land. Aggressiveness was also heightened by the t-Virus. 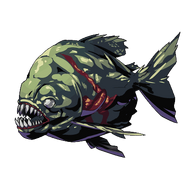 Piranha in Clan Master.
Add a photo to this gallery
Retrieved from "https://residentevil.fandom.com/wiki/Piranha?oldid=807149"
Community content is available under CC-BY-SA unless otherwise noted.