View source
watch 02:56
Raise a Floppa - The Loop
Do you like this video?
Play Sound
Prime universe
(Capcom's primary storyline)

Plagas (プラーガ, purāga?) are a genus of parasitic arthropod belonging to an unknown taxonomical order. They are endemic to a remote mountainous region of Spain from whence they get their name; from the Spanish word "las plagas", meaning "the plagues".

Assuming Plagas are otherwise typical parasitic arthropods, they are believed to asexually reproduce, with their eggs being expelled from the host and consumed by other animals as part of their life-cycle. Plagas typically reach maturity within days of hatching, and following the larval stage grow through three stages dubbed "A", "B" and "C". Plagas are able to influence their host's actions by latching onto the nervous system, increasing aggression in human hosts, dubbed Ganados, as well forming a social cluster with other hosts. Unless the host's brain were destroyed, this influence is not total, allowing hosts to continue with their daily routines.

All Plagas living in the 21st century are descended from either of two genetically-modified species engineered by the paramilitary organisation, Los Iluminados, as part of its bioweapons project.

Though often connected with Spain, the Plagas may have first arose in West Africa based on the presence of desiccated remains within the Ndipaya Kingdom. These ruins are very ancient, dating back to perhaps the Neolithic age. The Plaga population in Spain could be as old as the Bronze Age, and Ganados were known to perform human sacrificial rituals as detailed in Wharf B cave art.

Salazar, a nobleman of indeterminate rank, led a brutal crusade in the region against the Ganados for their pagan beliefs, and surviving Plagas were sealed within caves beneath a mound, separated from the nearby village by a deep valley trench and a large body of water. A fortress was built above it, of which Salazar and his descendants took on the role of Castellan, intent on preventing the Plagas' escape.[1]

Around the Millennium, Osmund Saddler, a man with unspecified links to bio-weapons research, became aware of the organism and began plans to use the Plagas to gain money and influence on the international stage through the parasitization of others. Taking on the role of a Prophet, leading the cult "Los Iluminados" - Spanish for The Enlightened- Prophet Saddler gained the loyalty of Ramon Salazar, 8th Castellan, who agreed to release the Plagas to atone for his family's sins.[2] The two, and the village workers hired to conduct the excavation,[1] found the Plagas long since mummified in the low-oxygen environment.[3] Hope was restored several years later when the spread of a strange disease amongst the workers revealed the Plagas had survived in the form of spores and were in the process of growth within their new hosts.[3]

Having established a large research complex and military base around ancient ruins on a nearby island, Los Iluminados began work on studying the Plagas, and over time genetically-engineered as many as three new species, which were significantly more difficult to remove from the host. These species were the Recessive Plagas, which took control of the host; the Dominant Plagas which left the host alone, allowed them to issue commands to the Ganados and imbued them with the ability to mutate at will; the third was the Queen Plaga, an organism living in the castle which asexually produced more eggs. As this offered great risk to Saddler's ability to control his growing organization, the Dominant hosts were limited to himself, Salazar, and Fr. Bitores Mendez, the village priest who helped him convert the local population, who would serve as an army to keep out spies.[1]

In continued human testing, Plaga research was found to mutate humans under certain circumstances, whether making them stronger, making them grow to giant proportions, or make them able to regrow entire bodyparts within seconds.[4] Human-animal hybrids were created with the Plagas as well, leading to the Novistador; the Verdugo and U-3.

In 2004, Los Iluminados made their move for world influence in an ambitious plot. Due to a leak by Dr. Luis Sera, a B.O.W. manufacturer dubbed the "rival company" became aware of the Plagas, and one of their H.C.F. agents, Jack Krauser, was sent out to recover a sample for further study. Krauser was instrumental in the kidnapping of Ashley Graham, daughter of President Graham, on her way home from the University of Massachusetts; having previously served in an Army special operations force, his skills made it a success. Graham was taken to Spain and injected with a Plaga egg through a syringe. There, it was expected she would become a Ganado and be taken back to the United States and serve to conduct operations on Saddler's behalf. Though the US government kept the kidnapping a state secret, they received an anonymous tip linking Graham to the area. With many agents being investigated by the government,[5] only US-STRATCOM agent Leon S. Kennedy was forced to begin the investigation alone.

Meanwhile, Sera finally abandoned Los Iluminados and escaped the island base with a Dominant Plaga egg. Krauser, having become host of a Dominant Plaga himself, became a liability to both Saddler and H.C.F., and was forced to call for agent Ada Wong to continue the investigation in his place, and take the sample from exchange for his protection.[6]

Over the course of the night, the different parties worked with and against one another. Kennedy was captured and implanted with an egg on the orders of Saddler,[7] who wanted him as an additional mole in the US. Sera shifted between whether to hand over the Dominant egg to Wong or Kennedy. Krauser and Wong turned on one another, while both claiming loyalty to Dr. Albert Wesker, their H.C.F. liaison. By sunrise, Fr. Mendez; Salazar; Krauser and Sera were dead, the Queen Plaga was destroyed, Leon Kennedy and Graham were free of the Plaga parasites, and the group's bioweapons research was in ruins along with their army of mind-controlled followers. With the death of Saddler, who stole the egg from Sera, Wong finally turned on Kennedy and took it on behalf of H.C.F., though helped Kennedy and Graham escape the island as explosives were set to cleanse the area.

In the aftermath of the incident, Wong followed orders from H.C.F. to betray Wesker, and provided him with a Recessive Plaga, keeping the Dominant Plaga for her bosses.[8] Wesker was initially set-back by this double-cross, but was successful in obtaining the remains of a Dominant Plaga from the body of Krauser. Genetic modification of the two samples was conducted by Tricell on Wesker's behalf, resulting in the creation of the Type 2 and Type 3 species. The Spanish authorities made attempts to quarantine the mountains to prevent surviving Plagas from spreading, though refugees who fled from Los Iluminados were parasitised when they returned home. Los Iluminados itself survived in a reduced form, and many years later worked with Glenn Arias, who used genes from their Plagas to create the A-Virus.

A Plaga is capable of altering its host's behavior by attaching itself to a human's central nervous system between the lungs and heart. Plaga infection can be very painful to the human host and causes internal hemorrhage, coughing up blood, swelling of blood vessels around the eyes, fainting, convulsions,[3] and hallucinations. For these reasons, juvenile hosts of the parasites inevitably die soon after the eggs hatch.[1] The Plaga begins altering the host's biochemistry from birth, with the changing of the eyes to red being a common sign.[note 2] The Plagas also cause mutations in their hosts while increasing their physical strength and durability. For example, Ganados can remain standing after sustaining several gunshot wounds, and some can wield heavy tools without difficulty. If the host is severely injured, adult Plagas may tear through the neck and use their own bodies in self-defense.

Plagas are social creatures, and hosts thereby also form a pack mentality.[9] Though hosts may communicate via speech, Sera's studies indicated that the Plagas themselves communicate via ultra-high frequency sound waves; a special organ exists to pick up these vibrations, which can be interpreted as commands.[10] This system allows for the Dominant Plaga hosts to issue commands to Ganados. It has been observed that not all Plagas will act well to each other. Even after gaining control of the mountains, Los Iluminados saw fit to execute locals, using an abattoir near the village and the castle dungeons for executions.[11] Ganado mutants such as the Gigantes also acted violently towards other hosts. Despite being host to a Plaga parasite, Kennedy was also attacked during his mission, and received a warning by Fr. Mendez of suffering consequences for going against them regardless of being a host.

Los Iluminados recorded a number of manners in which the Plagas could be killed, including means which would not kill the host. Their research was for the ultimate goal of genetically-engineering a species which lacked these defects,[12] though their finalized Recessive Plagas still have a number of weaknesses.

Plagas are extremely sensitive to ultraviolet (UV) radiation, and thus avoid daylight. A radiation therapy procedure was developed by Sera's team, which would douse the patient in enough UV radiation to kill a Plaga without invasive surgery.[12][13] This procedure was used to treat Kennedy and Graham. In both cases, the Plaga killed was a hatchling, and it is believed the chances of survival are significantly lower for hosts of adult Plagas.[12][14] Relating to the UV treatment, Flashbangs were found to be effective as a means of killing Plagas that had emerged from their hosts at night.

The growth of hatchlings can be halted through certain forms of medication, as discovered by Sera's team, and this medicine can also kill unhatched Plagas.[14] Sera handed this medicine to Kennedy and Graham when they were too far away from the island laboratory to receive UV treatment.

It is possible that Recessive Plagas can be killed through the destruction of the host's nervous system in a way that will keep the host alive but in a paraplegic state. This was performed on Alexander Kozachenko to prevent a Plaga taking over his body. However, this was a Dominant Plaga genetically-engineered years later by another group.

Once it hatches inside a human host, the larval Plaga undergoes three primary stages of development. 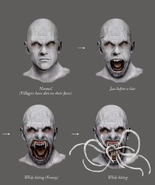 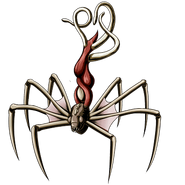 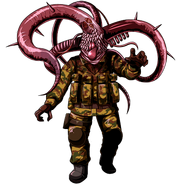