The Prelude is the opening scenario to Resident Evil 6, serving as a tutorial stage.

Taking place in Lanshiang, the scenario copies a section of Leon Chapter 5, but is changed to incorporate more of the game's mechanics. The player character of this scenario is Leon S. Kennedy.

Before life and death in Lanshiang, China, Leon and his new partner, Helena fall into the car. Helena was unconscious and Leon was managed to get her out there.

Waking up outside supposidly under attack from a helicopter, Leon wakes up and drags Helena into a nearby building where he continues to support her until he is able to find a herb and combine it to make Health Tablets for her. Upon doing this, he gets ambushed by a BSAA zombie, dispatching it quickly with its knife. Now able to walk, the two make their way outside after Ingrid Hannigan suggests a route for them, only to narrowly escape an explosion by jumping into a nearby helicopter.

Leon takes over control of the vehicle as the pilot dies, however he turns into a zombie and attacks Helena, prompting Leon to finish him off, before the helicopter crashes into a building, despite his best efforts. Surviving the crash, they make their way into a large chamber where something large appears in front of them. Leon remarks "Back for more?" and then the prelude ends.

"Hang in there, Helena."

Leon: "You're not gettin' off that easy. Come on."

"After all we've been through, it'd be a waste to give up now."

"We're almost through this."

"There's gotta be a first aid kit in here somewhere."

"Makes me sick seein' good soldiers die like this."

Hannigan (via radio): "Leon! Are you there?"

Hannigan (via radio): "Good to hear you're OK. Where's Helena?"

Leon: "She's not doin' too good. She needs medical attention."

Hannigan (via radio): "Do you have any herbs left?"


{Cutscene}
see: We're Not Done Yet


If you use all your ammunition


After killing the zombie

Leon: "Can't let your guard down for a second."

Hannigan (via radio): "I've sent over the Field Guide to your PDA. You can always refer to that in a pinch."


After opening to the street

Leon: "Hunnigan! Can we make it to the tower this way?"

Hannigan (via radio): "Yes. Just keep moving in that direction."


After a zombie breaks the barrier

Leon: "They're comin' out of woodwork!"


Plane drops from the building

BSAA Soldier: "Over here! Get in!"

Helena: "This thing isn't gonna hold up much longer!"


Helena gets attacked by the zombie BSAA soldier


The helicopter hits a building


After escaping the falling chandelier


After entering the tower


{Cutscene}
see: It's Only Going to Get Worse 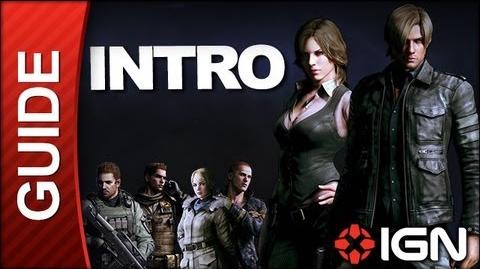 There are a couple differences in Chapter 5:

Retrieved from "https://residentevil.fandom.com/wiki/Prelude?oldid=843533"
Community content is available under CC-BY-SA unless otherwise noted.