Project Resistance is the working title of a video game currently being developed by Capcom, described as a "team based survival horror experience".[5] A closed beta took place between 4–7 October 2019.[6]

Taking place in 1998 just before or during the Raccoon City Destruction Incident, four civilians have been abducted by the Umbrella Intelligence Division. Sent to the "NEST2" facility, they are forced to fight a number of mutants on behalf of senior Umbrella employees to prove the effectiveness of Umbrella's t-Virus Project.

The game is a team-based cooperative game, with sessions consisting of a maximum of five players. Four players are "Survivors", who are given tasks to complete while being attacked by monsters. The fifth is a "Mastermind", who can manipulate the facility, watch the others via CCTV and send mutants to fight them. The Survivors can obtain "Umbrella Credits" during the course of each stage, which is used to purchase recovery items or new weapons. The Mastermind on the other hand depends on a point system which is used to spawn new creatures, traps, or arm the CCTV camera with a machine gun.

The Survivors must work together in order to escape the Umbrella facility within a given time limit. When a survivor takes too much damage, they get in a downed stated, and a team mate can revive them if they get there in time. If they don't get any help, the player will respawn elsewhere but a chunk of time will be lost with each death. Each survivor has their own set of skills and a label that defines them as "Damage", "Hacker", "Support" and "Tank". Weapons picked by the survivors consist of not just firearms but melee weapons like 2x4s or a Steel Bat.

As the Mastermind, the player must watch the survivors via Security Cameras and prevent them from escaping, impeding their progress by locking mechanical doors, placing traps, or summoning creatures and even controlling them. Known enemies in the game include Zombies, Lickers, Zombie Dogs, Ivy and a T-103 Tyrant.[7]

It was confirmed during the presentation at TGS 2019 that the game will include a single-player campaign.

A new game had been teased with the Resident Evil Ambassador project, which asked fans to join a TGS 2019 playtest on 12 September. It was officially confirmed as a Resident Evil title on 29 August 2019,[8] and a teaser trailer was released on 9 September.[4] Gameplay footage was shown on 12 September at TGS, following which Capcom confirmed there would be a closed beta for the PlayStation 4 and Xbox One, which took place between 4–7 October.[6]

Wallpapers given by completing the closed beta survey (PC 1920×1080) 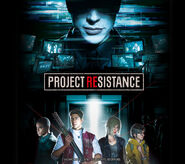 Wallpaper (iPhoneSE)
Add a photo to this gallery

ditto
Add a photo to this gallery

Retrieved from "https://residentevil.fandom.com/wiki/Resident_Evil:_Resistance?oldid=767806"
Community content is available under CC-BY-SA unless otherwise noted.