"Promo Girl" was a model who advertised Umbrella products in TV commercials in 1998, including Adravil; Aqua Cure and Safsprin.

In the main game, she will appear only while watching the ad which contains a password that opens the door to the sales storage. She can advertise such pharmaceutical drugs such as Adravil, Aqua Cure and Safsprin.

Promo Girl is also "featured" in Operation: Mad Jackal, where she takes the role of a hostage in The Raccoon Press' office. She's the only female hostage in the mini game and she will be surrounded by five female zombies.

The list of items she can drop if she is saved are:

When the player enters the room she's in they will hear the yell "Help me!!!", signifying that she is still alive. However, if the player is too late (more than 9 minutes of gameplay), she will be found dead and there will be no enemies. 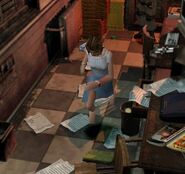 Saved promo girl
Add a photo to this gallery

Retrieved from "https://residentevil.fandom.com/wiki/Promo_Girl?oldid=779277"
Community content is available under CC-BY-SA unless otherwise noted.