The tower was the hub for Neo Umbrella's experiments in China, save for their underwater facility; its location was chosen because of the thousands of people living in and around Tatchi, who could be used as test-subjects for the C-Virus.[1] Carla Radames' personal lab (or at least one of them) was located inside the tower.

During the Lanshiang bioterror outbreak, the Bioterrorism Security Assessment Alliance designated the Quad Tower as a safe zone and civilians on the riverside were evacuated to it, in case J'avo from Waiyip reached the city. When the airborne form of the C-Virus was released into the district, many of the citizens transforming into zombies. The few remaining BSAA operatives pressed towards the tower, expecting to receive backup when reaching there. However, by the end of the ordeal only the American agents Leon S. Kennedy and Helena Harper reached the tower, with a single BSAA operative driving into the complex, to be killed later in a fight with Derek C. Simmons.[2] The tower was damaged even more as Simmons' mutated forms continue to pursue Leon and Helena to the rooftop.

Later that night, Ada Wong infiltrated the lab in order to destroy it all. She also killed Carla's "greatest creation yet" before it could hatch from its cocoon. 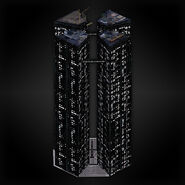 Quad Tower diorama
Add a photo to this gallery

Retrieved from "https://residentevil.fandom.com/wiki/Quad_Tower?oldid=802218"
Community content is available under CC-BY-SA unless otherwise noted.