The Queen Zenobia was a cruise liner operated by the Paraguas Line Company until 2003. It was used as a base for the bioterrorist organization Il Veltro in 2004; following that it was used for a year as a secret, military-funded laboratory to test the t-Abyss Virus.

The ocean liner was named after Zenobia, the queen of the briefly-existing Palmyrene Empire in Syria.[1]

The Queen Zenobia was constructed in 1978 along with its sister ships, the Queen Semiramis and Queen Dido. Both ships' designs were based on blueprints drawn-up by the architect George Trevor before his disappearance in 1968. The trio were to represent a replication of the high-class liners of the 1930s, thought to be the "golden age of cruise ships". The Queen Zenobia, while in her original service, continued to be one of the most popular cruise ships of the 20th century.

When air travel became far less expensive and far more popular, the concept of long sea-faring voyages became dated. By the second half of the 1980s, the trio appeared to be destined for the scrap yard until an unexpected purchase was made by Umbrella's cruise lines subsidiary, the Paraguas Line Company.

Shortly after their purchase, the three received a great overhaul in their designs, with the period-'30s steam turbines being replaced by a diesel-electric propulsion system to keep up with the times. Along with the renovation work was the expansion of the ships' cabin areas and their respective holds. State-of-the-art technology was brought onto the liners to make them the forefront in modern cruising.

After its restoration, the Queen Zenobia, as the flagship of the Paraguas Line, began conducting round-the-world tours and excursions along South America, with the start and finishing points in the route being the Mediterranean. In the first years of the 21st century, the Zenobia's tour became a sail along the North African countries along the Mediterranean.[1]

In 2003, the Raccoon Trials found Umbrella liable for damages for the 1998 Raccoon City Destruction Incident and the United States' "Suspension of Business Decree" against the company was upheld, leading to its bankruptcy. Unable to support itself in light of its parent's public demise, the Paraguas Line Company soon after filed for bankruptcy, and the ship was again fated to be scrapped. Strangely, it disappeared soon after, having been secretly acquired by US Commissioner Morgan Lansdale. Lansdale provided the Zenobia and her sister ships to terrorist organization Il Veltro for use as platforms to launch attacks on the Mediterranean city, Terragrigia. After disposing of the Veltro terrorists with a remote-triggered biological outbreak, Lansdale re-purposed the ship for usage as a laboratory complex. Using their laboratories, he promoted the research of the mutagenic virus known as "The Abyss" and development of a new weaponized version of it, named the t-Abyss Virus, planning to cause a "man-made pandemic".[2] After the cure to the virus was successfully developed, a second biohazard was triggered by Lansdale in order to eliminate loose ends in his plans, soon after sending FBC agents to collect the data. He sent the B.O.W.s on board to rampage and kill all personnel, as well as to dispose of the BSAA members who later came to the ship to unveil Lansdale's crime.

As BSAA operatives Chris Redfield and Jill Valentine discovered plenty of evidence to condemn the FBC, Lansdale released a group of B.O.W.s to dispose of the two agents, but he fails and instead sent his mole, Jessica Sherawat, to initiate Zenobia's self-destruct countdown.

Escaping the explosion, Chris and Jill find themselves facing a whale-like B.O.W. named Malacoda trying to sink them with the ships. With assistance from fellow BSAA members, Chris and Jill managed to bring down the Malacoda and left the destroyed ship.

Starboard view of the Zenobia.

A painting show the Spencer Estate - The location in the previously released game (and the next one chronologically, story wise)

The Queen Zenobia at sea. A small boat can be seen on the starboard side.

Bow of the Zenobia from the old build. 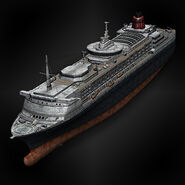