The Quick Molded (クイック・モールデッド, Kuikku mōrudeddo?)(alternatively named 4-Legged Molded) is another, much smaller variant of Molded that appears in Resident Evil 7: Biohazard. 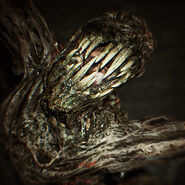 "4-Legged Molded" Icon on residentevil.net
Add a photo to this gallery
Retrieved from "https://residentevil.fandom.com/wiki/Quick_Molded?oldid=810331"
Community content is available under CC-BY-SA unless otherwise noted.