Quint Cetcham was an early member of the Bioterrorism Security Assessment Alliance. He provided technological support for the organization under the callsign "Jackass".

On and off the battlefield, he and Keith Lumley were a good combination. Many of his own ideas were included in the features of the "Genesis" scanner. He himself devised and subsequently developed the characteristic headset he wore. Special types of grenades used by B.S.A.A. were developed by Quint due to him being fan of sci-fi movies genre, particularly Star Wars.

In 2005, under Chris Redfield's suggestion, Quint and his partner Keith Lumley were assigned by Clive R. O'Brian to storm the Valkoinen Mökki Airport, one of Veltro's main hideouts, to collect any information about the Queen Zenobia in order to track their comrades, Parker Luciani and Jill Valentine. There, they witnessed a Veltro operative violently mauled to death by an invisible B.O.W. which upon further inspection obtained a USB Security Token for the crashed airplane's computer. With the USB in hand, they made their way to the crash site, previously visited by Jessica Sherawat and Chris Redfield.

There they were attacked by a horde of Farfarello and Fenrir. After defeating the creatures, they used the USB to access the airplane's computer, allowing them to report back to headquarters, telling the director the coordinates of the ship that Jill Valentine and Parker Luciani were supposedly on board. O'Brian then informs Jessica and Chris of the situation and sends them on a rescue mission.

Quint and Keith later return to the airport to investigate previously unexplored area to hack into the computers for more information, where Quint tries to access the data, while Keith is forced to take on another horde of Farfarello, Fenrir, and Hunters. After surviving the waves of B.O.W.s, Quint finally puts all the information together, and realizes that the mastermind behind the whole Veltro revival act was none other than director O'Brian himself to put heat on FBC's Commissioner, Morgan Lansdale.

An ordered air strike bombing the airport is then initiated, with Quint and Keith barely making it out alive. In the end, Quint and Keith are revealed to have escaped the bombing. Some time afterward, Quint still works at the BSAA's main headquarters in the R&D Department but continues refuse promotion to any leadership position.

Quint is a playable character in Raid Mode. His melee attack is to set off a timer bomb. The explosion can hit enemies around him. His snow gear costume is unlocked by beating 100 missions and his HQ uniform is unlocked by reaching player level 50.

Quint is an obtainable diorama figure on ResidentEvil.net awarded as a random prize through using a Genesis Scratchcard.

Quint and Keith after the air-strike 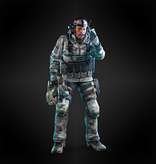 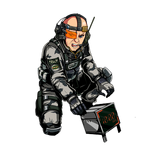