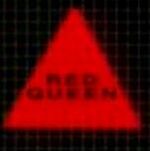 It was originally integrated into the Arklay Laboratory but was moved away by Sergei Vladimir during the t-Virus outbreak in 1998. Albert Wesker first met RED QUEEN in that same year. While trying to retrieve Umbrella's information through a computer, RED QUEEN cut off his access and introduced itself. This caused Wesker to destroy the computer's monitor in a moment of anger and to vow take revenge on RED QUEEN.

It was relocated to a facility in Russia, and by the time of 2003, it gave a report on a biohazardous outbreak to its leader, Sergei, caused by Wesker. It was last seen by Wesker in the Russian Facility, where he managed to save the entire Umbrella history into a single RED QUEEN-integrated disk. He then erased the computer's memory, finally claiming his revenge on it, the process of which also causing a huge black-out throughout the facility. It was also responsible for controlling the Tyrant-Armored Lethal Organic System, a variant of the Tyrant Bio Organic Weapon.