Start a Wiki
watch 02:27
The Loop (Games)
Do you like this video?
For the public version, see RESIDENT EVIL 2 1-Shot Demo.

The demo's main menu at E3 and NYCC

During E3 2018, Capcom's booth had a playable Resident Evil 2 remake demo. This demo only features Leon as a playable character, and ends once the player acquires the Spade Key and approaches Marvin Branagh.

At ACGHK 2018 and TGS 2018, Tsuyoshi Kanda played this demo on stage, in the latter, Yoshiaki Hirabayashi commented over it.

At the NYCC 2018, the demo was playable alongside the Claire demo, both being on the same build, with the player being able to choose which demo they'd want to play from the main menu.

On September 29, 1998, rookie officer Leon S. Kennedy, who is supposed to start on his first day for the Raccoon Police Department (RPD), arrives in Raccoon City only to discover that it has been overwhelmed by zombie-like creatures. The demo starts out with Leon at the Main Hall of the Raccoon Police Station, and he later goes to the Watchman's Room on the east side of the building and interacts with fellow RPD officer Elliot Edward. Despite Leon's help, Elliot is killed while attempting to crawl under the roller door. Leon acquires Elliot's Officer's Notebook, making his way back to the Main Hall while dodging zombies. This causes Leon to be in a tough situation when trying to use the roller door that leads to the Main Hall after one of the zombies chases him and grabs him by the leg. However, another fellow RPD officer Marvin Branagh, who is clearly injured and infected, shows up and help him get into the hall. From here, Leon shows Marvin the notebook he acquired from Elliot which shows a passageway that leads to a parking lot and a "way out". Marvin tells Leon to find the three medallions needed to open the passageway and gives him a knife. When Leon asks Marvin why the city is infested with zombies, he replies that he has no clue, but gravely informs Leon that he should be careful with the monstrosities occupying the station. Marvin then warns Leon that he should save himself and not hesitate to shoot any zombie, whether in uniform or not.

The knife is used to open the path on the first floor that leads to the west side of the Police Station. Once at the third floor of the Police Station, Leon acquires the Spade Key and from here on there are two ways the player can progress through the demo, they can either proceed to the Library and unlock the door that links it to the Main hall, go back to the West office and instead unlock the door in there which also leads to the main hall.

Going through the Library triggers Marvin to radio Leon and say he's got something important to show him. Either way, once Leon meets back with Marvin, he shows Leon a camera footage of a woman next to a gate, who Leon recognizes as Claire Redfield. Marvin then mentions that Leon can get to that place by using the door on the second floor of the main hall on the east side of the station.

Once this cutscene is over, the screen fades to black and a "Thank You for Playing." text appears followed by an image of Leon and the release date of the game. 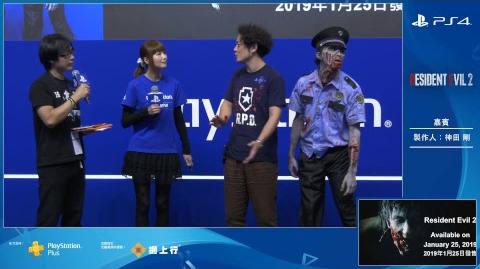 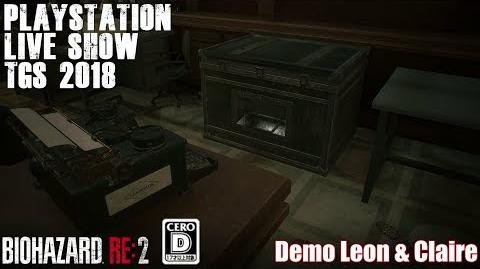 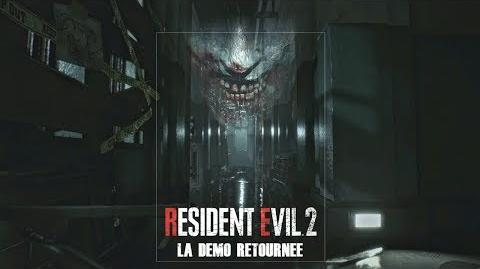 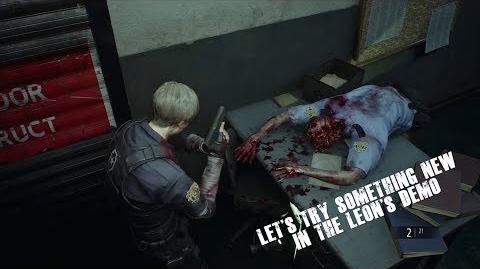 The intro of the demo, serving as a loading screen.

Claire's only appearance in the demo, at the ending cutscene.

The image displayed once the demo is completed, showing the release date of the game.

The loading screen shown in the demo if the player dies.

(top) No zombies can be seen at the gate and (bottom) a few zombies were added in the build playable at TGS and forward.

The hanging zombie at the West Storage Room, even though his legs were shot off of his body.

A zombie crawling on a small desk, instead of attacking the player or trying to get off of it.
Add a photo to this gallery
Retrieved from "https://residentevil.fandom.com/wiki/RESIDENT_EVIL_2_Leon_demo?oldid=776282"
Community content is available under CC-BY-SA unless otherwise noted.