Raccoon City Re-Contagion was a supplement web game created by Capcom to celebrate and promote the release of the Resident Evil 0 HD Remaster, an HD Remaster of the original GameCube game.

The premise of the event was identical to the similar Raccoon City Contagion, inviting people to register with a Facebook account, a Capcom account, or a regular e-mail. Upon registering, the individual's account would be linked to the infection and add on to an infection counter, which showed the percentage of the population that the contagion had spread to.

The main site showed a map of Raccoon City and outskirts (alongside the Ecliptic Express train routes), with infection hot spots that changed and grew as the contagion counter increased. On the main site along with the map, viewers could see regular updates, individuals being infected, as well as updated news on the spread of the infection in-universe.

When players registered for Raccoon City Re-Contagion, they received a copy of their medical record from the site. This record was a simple image that indicated their username, the place of their infection, and the "type" of zombie they had become.

Similarly to the original Contagion, extra content for the respective game (in this case Resident Evil 0) was released once the infection increased. However, unlike Contagion, Re-Contagion featured multiple infection goals at 30%, 60%, 80% and 100% infection. In addition to this, Re-Contagion featured an additional incentive to participate as random infectees could win physical prizes depending on the region.

Each person who participated in the campaign received a "Zombie Type" after being infected. These types are as follows:

During the event, a timeline could be accessed which showed 30 different incidents that occurred throughout the city between November 13, 2015 and December 7, 2015. These incidents were based on various events from the Raccoon City Destruction Incident.

A map of Raccoon City and the surrounding areas from the website.

A map of Raccoon City after 100% infection. 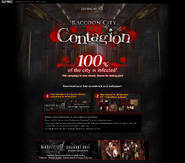 The header for the site. 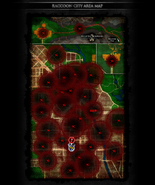 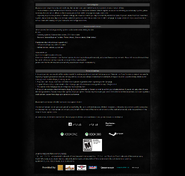 Final progress bar.
Add a photo to this gallery

Retrieved from "https://residentevil.fandom.com/wiki/Raccoon_City_Re-Contagion?oldid=616713"
Community content is available under CC-BY-SA unless otherwise noted.