Memory of a Lost City 1

On one of the black suitcases to the left of the counter in the Gun shop.

An American Midwestern city situated in a basin surrounded by mountains with a population of more than 100,000.

September 1998 Beginning with a string of cannibalistic murders which occurred several months earlier, unrest spread among Raccoon City's citizens until one night, violence broke out across the city, crippling the city's transportation infrastructure.

Citizens descended into a state of panic, with all lifelines cut off. Despite rescue efforts on the part of the Raccoon Police and Fire departments, the situation continued to worsen.

The city is eventually overrun with hoards of zombies, referred to as "the walking dead."

This is where the fight between the Umbrella Corporation, the cause of this nightmare, and Leon begins. 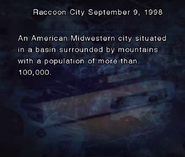 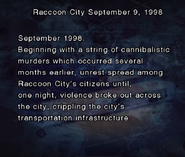 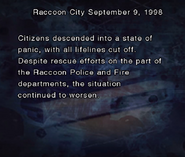 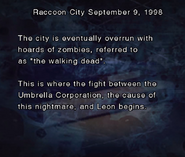