The Raccoon Police Department, commonly abbreviated as "RPD", was a municipal law enforcement agency which served Raccoon City in Arklay County, United States. Whether it had jurisdiction over the neighboring towns such as Stoneville, and its relationship with the Arklay County Sheriff's Department (ASD) is currently unknown.

The Raccoon Police Department was established in 1969, when the then-city's rapid expansion necessitated a dedicated police force beyond the Arklay County Sheriff's Department (ASD). Raccoon's art museum, which had closed down, was purchased by the RPD the same year to be used as their base of operations, the Raccoon Police Station.

When Mayor Michael Warren began preparation for the "Bright Raccoon 21" project in the early 1990s, the force received extra funding from various local companies, including Umbrella USA, who wanted assurances the RPD could deal with the increasing crime rate and the threat of domestic terrorism. From this funding, the Special Tactics and Rescue Service was established.[1]

During the 1990s, the RPD was under the control of Chief Brian Irons, who received monthly bribes from Umbrella USA to keep the company's illegal activities from being investigated.[2] Following the events of the Mansion Incident, Irons barred investigation into Umbrella at the direct request of Dr. Birkin, causing the surviving members of S.T.A.R.S. to organize their own private investigation of the company and the Chief.[2][3][4][5]

On Wednesday, September 23, 1998, a modified ε strain of t-Virus contaminated Victory Lake, the reservoir for Raccoon City's drinking water. On Thursday, tens of thousands had mutated into zombies, and RPD personnel were deployed to handle rioting all over the city, with significant action at Warren Stadium, where Raccoon Sharks were playing.[6] Deputy Chief Raymond Douglas led an operation to evacuate civilians from the congested parts of the city, which was made difficult by the excessive construction of barricades. His name was on posters put up at Raccoon Zoo that day detailing times the Army Chinooks were to pick up refugees, though he may not have put them up himself. Douglas was killed near the Apple Inn, and his body burnt when a nearby fuel truck exploded. Meanwhile, a police team consisting of Elliott, Eric, and Harry had orders to detonate explosives on a major thoroughfare in a plan to wipe out hundreds of zombies.[7] This succeeded thanks to the efforts of a group of survivors from Jack's Bar, when Elliott and Eric were killed. During these events, the Raccoon Police Station opened its doors to civilians fleeing the rioting and offered food and protection. However, Police Chief Brian Irons made plans to sabotage the defense in a selfish desire that if he die, everyone else must go with him.

On the evening of Saturday, September 26, a large RPD force consisting of Raccoon SWAT and regular officers drove out to choke points near the station, such as the Jefferson Bank and a nearby tram station, in an effort to meet the zombies head-on. Though their counterattack was fortunate enough to coincide with the arrival of some 120 Umbrella Biohazard Countermeasure Service mercenaries trained in anti-B.O.W. warfare, the sheer number of zombies on the streets proved to be overwhelming and the both forces were wiped out.[8][9][10]

Back at the station, numbers dwindled further with constant raids from zombies climbing through the windows, along with the arrival of the Lickers who can stick their tongues long enough to pierce through any survivor they encountered. By the early hours of Monday 28, the survivors under Lieutenant Marvin Branagh were seriously considering abandoning the building entirely. When ex-S.T.A.R.S. officer Jill Valentine explored the building that night, she only found Lt. Branagh, injured by a bite wound, and found no sign of other officers.

By October 1, most of the officers perished in the outbreak, whether being killed in the streets or in the station. That same day, the police station, along with the rest of the city, was destroyed by an experimental thermobaric missile from the U.S. Air Force in effort to eliminate any potential threat of virus that might leak on the outside world.

The standard uniform for patrol officers consisted of a white collared shirt and dark grey patrol trousers (Summer Uniform) and fall winter uniforms were light blue V-necked collar shirt with the RPD logo on both shirt-sleeves. This was accompanied with black trousers and black patrol boots. Caps and black ties were part of the uniform, but it is hard to tell if these were optional or merely neglected due to the outbreak.

Specialist divisions within the RPD had their own uniforms. Tony, a K-9 unit dog handler, wore a uniform which consisted of a white non-collared shirt under a black jacket and a plain cap more resembling a baseball-cap than those worn by Harry and Raymond.

More armoured uniforms were in service in 1998. Kevin Ryman wore a short-sleeved black jacket with the letters "R.P.D." on the front during the outbreak, which was exposed as a V-neck. He did not appear to wear a shirt underneath. Leon S. Kennedy, a rookie, was provided with a similar uniform, though in dark blue and covering the neck. Leon did wear a white, long sleeved shirt under his jacket. Both had pads above each shoulder and wore black gloves, however. These uniforms were themselves not far from the Raccoon SWAT uniform, which wore a dark blue shirt under a similarly designed body armour. SWAT also had access to riot helmets.

The Raccoon Police Department was comprised of several divisions, including Patrol Division, Special Weapons and Tactics (S.W.A.T.), the Special Tactics and Rescue Service (S.T.A.R.S), and a K-9 Unit, as well as minor departments containing 2-3 officers. Information about these divisions is given below:

The Patrol Division was the backbone of the RPD, containing some of the most recognizable division members in the city. They provided around-the-clock service on foot, by patrol car and by aerial surveillance to the residents of Raccoon City. During the Raccoon City Destruction Incident, these officers were pushed to their limits in dealing with the hordes of undead creatures overrunning the city whilst coordinating evacuations and protecting civilians who were trying to escape. They sustained near total casualties during the incident, with a mere handful of officers escaping alive.

The Special Tactics and Rescue Service (S.T.A.R.S.), was the department's first elite unit. It was tasked with both responding to more dangerous threats than the patrol division was trained to handle, as well as search and rescue operations in the surrounding Arklay Mountains region. The unit was divided into two teams, Alpha and Bravo. Unlike the patrol division, the S.T.A.R.S. unit was allowed a large degree of freedom to customize their uniform and equipment. Many S.T.A.R.S. members had prior military backgrounds, including Jill Valentine and Chris Redfield.

The Special Weapons and Tactics (S.W.A.T.) was created to replace S.T.A.R.S. after the unit was disbanded. Like its predecessor, S.W.A.T. personnel were specially trained to deal with high risk operations and incidents of violent crime. The members of this team were skilled in the use of many weapons and were all in top physical and mental condition. All members of S.W.A.T. were killed during the Raccoon City outbreak.

The K-9 unit consisted of specially trained officers and their dogs – all police dogs were Doberman Pinschers at the suggestion of Chief Irons.[11] They would have been a valuable asset to the RPD. During the viral outbreak, this unit was completely annihilated by the t-Virus, with all of the department's dogs becoming infected, and running amok around the basement of the station. [notes 1] The only known officer from this unit was Tony.[12]

The Juvenile Division handled petty offenses by teenagers such as graffiti. Elran worked for this division.[13]

The Crime Scene Unit was responsible for securing crime scenes and recovering evidence in investigations.

Below is a list of known members of the Raccoon Police Department.

The Raccoon Police Department's fleet of vehicles initially used the 1979-1994 Chevy Caprices as the standard patrol vehicle,[notes 2] though in its final years, it began replacing them with the 1994-1997 Ford Crown Victoria Police Interceptor. The S.W.A.T. division was provided with GMC Swat Vans.

The RPD used an Aérospatiale/Eurocopter AS350B police helicopter for air patrol [24] and provided a further two Bell UH-1 helicopters for S.T.A.R.S. operations; one of which was destroyed during the Arklay Mansion Incident.[25][26]

The Raccoon Police Department possessed a variety of weapons for its officers.

The standard RPD sidearm was the Beretta 92FS, which was issued to many officers, with the members of S.T.A.R.S. receiving custom "Samurai Edge " versions. S.T.A.R.S. officer Barry Burton received a "Samurai Edge" version of the Beretta 96FS chambered for the larger .40S&W round. The Browning Hi-Power was commonly provided to the patrol division.[27][28][29]  Some officers, such as Kevin Ryman , were issued the more powerful M1911A1s.[30][31] At least one officer (Leon S. Kennedy) was provided with a Hecker & Koch VP70M, with the department having parts to further modify and upgrade it.[32][33] Additionally, one deceased RPD patrol officer was seen armed with a Glock 19.

The S.T.A.R.S. unit was also provided with heavily caliber Magnum handguns, such as the Desert Eagle and S&W Model 629, with Officer Barry Burton carrying a Colt Python.[34] Chief Irons carried a Smith & Wesson Model 329PD as his personal weapon.[35]

SWAT personnel were provided with MP5 Submachine Guns [29] and Remington 870 shotguns with Surefire weapon light. Another submachine gun used by the RPD was the Ingram M-11.

The RPD set up a barricade

The remains of a Police Cruiser 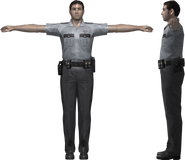 The main precinct was established in the late-1980s, converted from a former art museum located in Downtown Raccoon City on Ennerdale Street, one of the city's primary thoroughfares. Chief Brian Irons was instrumental in the purchase, acting as mediator on the deal and making several suggestions.[37] It is unknown if there were other precincts, although it is likely there were multiple smaller stations, due to the size of the city.