The Raccoon Police Station was established in 1969, when the newly formed Raccoon Police Department purchased a former art museum in Downtown Raccoon City.

When the t-Virus contaminated the drinking water in September 1998, tens of thousands transformed into Zombies within hours, and the police were called into duty, with many rallying at the station to defend it. In the early hours, the police station took in many civilians as refugees, including Sherry Birkin. On September 25, having gone insane, Chief Irons ordered for the police station's weapons locker to be emptied and weapons and ammunition scattered throughout. Due to these orders, police took casualties in the fighting against zombie intruders due to ammunition shortages.[1] On September 26, dozens of officers, including SWAT, were sent out of the station altogether to engage the zombies head-on, and were massacred as a result. Those left inside endured further attacks on the station on the 27th, and faced Lickers, mutations of the Zombies they failed to kill.[1]

On September 30, USS agent HUNK entered the police station to rendezvous with a helicopter at the front gate. On October 1, the precinct was decimated along with the rest of the city due to the Sterilization Operation carried by the United States Air Force on the orders of the U.S. president.

Originally, the building was an art museum in central Raccoon City until 1969, when the newly established RPD purchased it due to its convenient location and ample parking, and was then converted into the precinct. The building underwent various changes during renovations, while other areas of the building (such as the old air ducts) were left intact.[6] 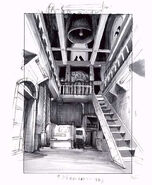