View source
watch 02:58
No Man's Sky Update - The Loop
Do you like this video?
Play Sound
Prime universe
(Capcom's primary storyline)
For the college in the Wildstorm comics, see Raccoon City College.

Raccoon University (ラクーン大学?) (referred to in the Biohazard Archives as "Raccoon City College") was an institution in Raccoon City based on the bank of Circular River.[1] In addition to typical college campus facilities, the University housed an advanced laboratory for the Umbrella Corporation. Yoko Suzuki and Valerie Harmon were students at the university, while Greg Mueller and Peter Jenkins worked out of the facilities there.

Raccoon University was founded at some point before the Second World War, with the faculty building designed by a Japanese architect. The bell tower, iconic to the city, was completed in the 1940s at the latest.[note 1] The university's first President was named William A. FitzGerald.

During the t-Virus outbreak that ravaged the city in September 1998, Mueller and Jenkins created an antidote for the virus, named Daylight. Though Jenkins managed to contact his friend George Hamilton, by the time the doctor arrived on campus, Jenkins was already dead. Mueller decided to test out his ultimate creation, the Tyrant Thanatos, releasing it into the University, where it massacred a team of UBCS agents carrying out "Operation: Emperor's Mushroom."

As a small group of survivors explored the campus and obtained Daylight, they witnessed the murder of Mueller by UBCS monitor Nikolai Zinoviev, barely managing to escape in time thanks to the C-4 Explosives Zinoviev planted to cover his own exit. After a final battle with the mutilated Thanatos, the survivors were airlifted out of the city by members of the Raccoon Fire Department. Raccoon University was annihilated along with the rest of the city minutes later during the U.S. Government's airstrike. 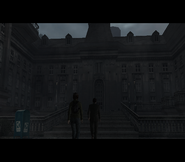 The University, as shown in Archives