Rani Chawla is the niece of a TerraSave member whom she accompanied to Harvardville Airport in 2005. She is a survivor of the bioterrorist attack that was orchestrated in secret by WP Corporation head researcher Frederic Downing, using ex-TerraSave activist Curtis Miller to spread T-Virus inside the airport.

Rani was born around 1997 and lived with her parents in India up until early 2005. While the exact circumstances of her parents' deaths are unknown, they appeared to have died as the result of a bioterrorist attack in which the T-Virus was released on the area (as India was flagged as an affected area by newscasts) or to human testing performed by the WP Corporation within the country.

Rani's explanation of the events indicated that her father left to help her mother (the nature of the trouble is left undetermined), assuring her that he would return, after which neither he nor Rani's mother returned. It is assumed that Rani's aunt then stepped in as her guardian.

In November 2005, Rani accompanied her aunt to greet Claire Redfield at Harvardville Airport. While she and Claire waited for her aunt to return with the limo, the two briefly met Frederic Downing. Soon after, Rani recognized Senator Ron Davis as he attempted to leave the airport incognito to avoid the angry anti-WP Corporation protesters at the door. She referred to him as "the bad guy they saw on TV" and pointed to him, drawing the attention of a nearby reporter.

When the airport became overrun with zombies, Rani ran off by herself in the chaos before she could be reached by Claire, who was separated from her at the time. After reuniting, she was put under the protection of Claire (mirroring a previous situation with Sherry Birkin) and was one of the four survivors that managed to lock themselves in the VIP lounge of the terminal to wait for help. While Claire left to find another survivor, Rani stayed behind with the VIP lounge hostess and the Senator, making her a bit stressed.

During the escape from the terminal, a panicked Senator Davis made a run for the exit and knocked Rani down into a swarm of oncoming zombies, from which she was narrowly rescued by Claire. With Rani safe, the group proceeded to escape the airport. Although she made it through the ordeal physically unscathed and was reunited with her aunt, Rani was visibly shaken by the incident. It is very likely that the events will leave her with some trauma, as implied by an enraged Claire to the Senator after he made a snide remark about hating children.

The next day, Rani was seen with her aunt waiting next to a car for Claire. Rani called out Claire's name while laughing and waving happily to her.

Sometime later, before 2012, Sherry Birkin sent in an email to Claire that she's on vacation, and that Rani would be very delighted to hear that she's coming home, indicating that Sherry may have become friends with Rani. 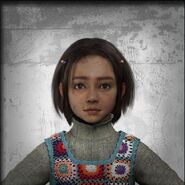 Rani's portrait in the Degeneration artbook. 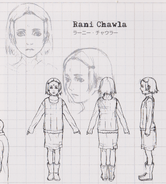 Rani with her aunt, waiting for Claire.

Rani with her aunt.

Claire waiting with Rani at the Harvardville Airport.

Rani pointing at the TV. 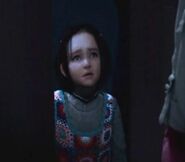 Rani at the door.

Rani inside the VIP Lounge during the Harvardville incident.

Rani on the floor. 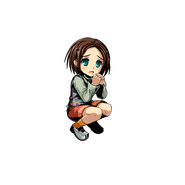