Rats living in the sewers of Raccoon City were the original carriers of the t-Virus that caused the Raccoon City Destruction Incident - as opposed to the leeches, which caused the outbreak in the Arklay Mountains. The only known example of an attack on a human was on an injured U.S.S. member seen in the introductory movie to Resident Evil Outbreak.

According to the BIOHAZARD 2 Official Guide Book, the rats in the sewers grew significantly from the t-Virus, but were killed-off by their enemies, the Large Roaches. 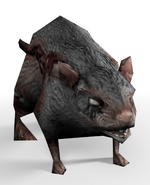 Rats consuming T-Virus in Resident Evil 2 Remake
Add a photo to this gallery
Retrieved from "https://residentevil.fandom.com/wiki/Rat?oldid=808814"
Community content is available under CC-BY-SA unless otherwise noted.