The Ravager is a weapon that appears in Resident Evil: Operation Raccoon City. It is a devastating high-caliber assault rifle.

The Ravager has been shown to be DEE-AY's weapon on choice in official material.[1]

The Ravager is one of the most powerful assault rifles in the game. Though, it is slightly weaker in comparison with the Hammer. It also has the highest blood frenzy out of all assault rifles. The weapon offers a decent accuracy and is also comfortable to use at a certain range. Like the Hammer, the Ravager suffers from the low amount of reserve ammunition - 25 ammo in the magazine and 100 spare rounds initially, slightly lower capacity and a slow rate of fire. The maximum amount of spare rounds is 125. The Ravager can be purchased at the pre-game menu with [9000 XP]. It is the most expensive assault rifle to be purchased. 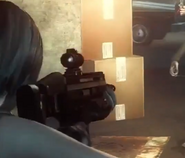 In the Triple Impact Trailer