Raymond Vester was an American soldier and later spy. From 2004-5 he was part of the Federal Bioterrorism Commission, and saw action in the Terragrigia Panic. The discovery of a link between the FBC's Commissioner Morgan Lansdale and the terrorist group il Veltro led to Raymond switching allegiance to the Bioterrorism Security Assessment Alliance, continuing as an FBC operative for the next year in order to gather information on Lansdale's activities. Following Lansdale's arrest after the Queen Zenobia Incident, Vester began an association with TRICELL, Inc. as a spy.

Raymond was a new recruit when the terrorist group il Veltro released Hunter B.O.W.s into Terragrigia in what became known as the "Terragrigia Panic". Three weeks into the FBC operation in the city, the forces were given orders to retreat to their base within the city ahead of a planned evacuation. When the Hunters invaded the base, Raymond was attacked and suffered a leg injury which prevented him from walking fast. He was rescued by the more experienced agents Parker Luciani and Jessica Sherawat, who helped him get to a conference room. There, he stumbled upon a telephone conversation Commissioner Lansdale was having with the Veltro leader, Jack Norman. Though too far to hear Norman, Raymond became increasingly suspicious his commanding officer was somehow involved with the bio-terrorist attack. However, he was unable to act on these suspicions, as the city was evacuated and destroyed soon after, with a military blockade around the ruins set up to prevent the recovery of any surviving incriminating evidence.

Following the attack, Raymond developed a rapport with the BSAA director Clive R. O'Brian, and became a mole within the FBC. O'Brian and Raymond devised a plan to expose Lansdale's involvement in the Terragrigia Panic over the next year. The basis of the plan involved staging a "revival" of Veltro. Raymond would impersonate Jack Norman, recruit extremists sympathetic to Veltro and set up a mountain base to create the illusion that the terrorist group had resurfaced. In doing so, the two hoped that Lansdale's response would provide evidence to expose him.

After a year old, unreleased video threat from the real il Veltro was discovered, Lansdale ordered Raymond and Rachael Foley to investigate the Queen Zenobia, while another team was sent to the Queen Dido to kill the surviving Veltro members and seize an audio device containing incriminating evidence against Lansdale. Raymond immediately informed O'Brian of his mission.

O'Brian planned to lead Jill Valentine and Parker Luciani, and Chris Redfield and Jessica Sherawat to the ship to investigate it, on the suggestion that the other team was being held captive. Aware of an FBC mole within the BSAA, Raymond was instructed to mislead all four BSAA agents, going so far as setting up a mannequin to look like a captive Chris to keep Jill and Parker occupied. The purpose of this conspiracy was to prevent the mole, should they be one of the four, of revealing the ploy to Lansdale before the incriminating information could be retrieved.

After boarding the ship with Rachel, the two split up. Raymond adopted his Veltro disguise in the presence of agents Valentine and Luciani, attempting to guide them through the ship to expose Lansdale's secrets. Without the disguise, he encountered Luciani and Valentine on the ship's bridge shortly after destroying the ship's controls and destroying their boat, feeding them with suspicion he had unusual orders from Lansdale. Raymond then ran to the communications room, where he destroyed the equipment and played an unreleased Veltro video to feed more evidence of Veltro's revival. This plan was led astray upon the arrival of Redfield and Sherawat, however. Sherawat, soon revealing herself to be Lansdale's mole, shot him in his Veltro uniform to prevent suggesting Lansdale's involvement in the Panic to the group. When his gas mask was removed, revealing his identity, the uninjured Raymond feigned death after whispering critical information to Luciani. This however, made Luciani a likely target for Sherawat, and he followed the two to the bridge where she was caught attempting to set off an explosive. Sherawat tried to shoot Raymond, though Luciani jumped in the way and was hit. Though Sherawat escaped, the two had enough information to incriminate Lansdale, and helped each other escape the sinking ship. Luciani was found adrift in the ocean and was rescued by the BSAA, though Raymond managed to disappear after the sinking.

Unbeknownst to either the FBC or BSAA, Raymond and Sherawat were actually participating in their own joint-mission as spies on behalf of TRICELL, who was interested in recovering the t-Abyss virus from the Queen Zenobia. The two met in a cafe where Raymond gave Sherawat a sample of T-Abyss. When she asked why he rescued Luciani, he merely replied that he "had his reasons."

Raymond is a playable character in Raid Mode but he is not unlocked by default. In order to unlock him on the 3DS, the player must complete every stage in Raid Mode in Chasm difficulty. On the port version, he is unlocked upon reaching level 10. His Melee Attack is a high kick.

Raymond is an obtainable diorama figure on ResidentEvil.net awarded as a random prize through using a Genesis Scratchcard.

Raymond in the Raid Mode fighting a cloaked Farfarello

Raymond disguised as a Veltro agent

Vester in the post-credits scene 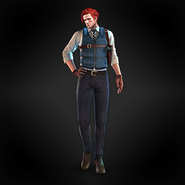 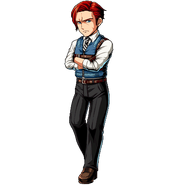 Raymond in Clan Master.
Add a photo to this gallery

Retrieved from "https://residentevil.fandom.com/wiki/Raymond_Vester?oldid=839903"
Community content is available under CC-BY-SA unless otherwise noted.