Rebecca Chambers (BIOHAZARD 0 Ver.) is an action figure manufactured and sold by Moby Dick. It is "Series 15" of the "REAL SHOCK ACTION FIGURE" line, where customers were expected to collect all action figures to assemble a Nemesis (Type-3) toy.

The action figure itself is based on Rebecca Chambers as she appeared in the Nintendo 64 biohazard 0 prototype. She comes with two different handguns for her to hold along with a removable hat and two First Aid kits to attach to either side of the toy's waist. Her shoulder armor can also be removed if one so chooses. She comes with Nemesis Type-3's left front leg. The figure features a limited amount of articulation, mostly centered around posing on the stand. The head can rotate and swivel, the shoulder joints are on a ball joint, the left thigh can rotate, both knees can bend, and her wrists and ankles rotate. 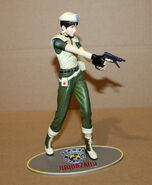 Retrieved from "https://residentevil.fandom.com/wiki/Rebecca_Chambers_(BIOHAZARD_0_Ver.)?oldid=768280"
Community content is available under CC-BY-SA unless otherwise noted.