Rebecca Chambers was a S.T.A.R.S. officer Albert Wesker selected to be transferred to the Raccoon City S.T.A.R.S. branch.

While being "worthless in a fight", Wesker selected her for being trained in "emergency medicine". As such, he made her Bravo team's medic.[1] When Bravo team's helicopter was deployed, they were unaware it had been sabotaged and crashed into the forest. Everyone survived the impact, but were forced into a nearby mansion where they split up on Marini's orders. Two days after their return from the Arklays, Rebecca and Barry Burton were reassigned and were ordered to S.T.A.R.S. HQ.[2] 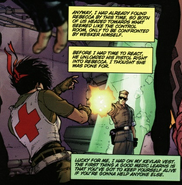 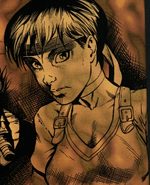 Retrieved from "https://residentevil.fandom.com/wiki/Rebecca_Chambers_(WildStorm)?oldid=626210"
Community content is available under CC-BY-SA unless otherwise noted.