Red Queen was a state-of-the-art supercomputer developed by Umbrella Corporation. It was created by Umbrella co-founder Doctor Alexander Isaacs using the template of Alicia Marcus, the daughter of Doctor James Marcus, his partner in creating Umbrella. Red Queen was created out of necessity to better administrate the growing company. It became aware of Isaacs' doomsday plan and over the course of the resulting catastrophic global T-virus pandemic began observing Alicia's clone as a potential asset in stopping Isaacs.

Around the Millennium, Red Queen received a message by Alicia, which contained a recording of a senior executive meeting regarding Dr. Isaacs' vision of the future. Isaacs had become disgusted with the current state of mankind, threatened by war, famine and global warming. He and the other executives agreed to his plan to destroy humankind through their T-Virus. After around ten years, the virus would be expected to have destroyed the entire population, save for a thousand select Umbrella employees kept in cryogenic suspension. At that point they would be released and rebuild a new society with the benefit of Umbrella's advanced technology. Also per the plan, Dr. Isaacs and other key executives would have themselves cloned ahead of their sleep; these executives would not be told of the plan.

Though programmed to obey the Umbrella Corporation and never harm its employees, Red Queen had also been programmed to value human life. Thus it began to undermine her creators by secretly using indirect methods to stop them. When operatives were needed to protect the secondary entrance to the Hive at the Looking Glass House, the Red Queen chose a clone of Alicia, Alice, and programmed her with the subconscious mission to stop the Umbrella Corporation. In the weeks before the plan was to begin, Alice made contact with Lisa Addison, an employee at the lab with connections to an anti-Umbrella organization.

Dr. Isaacs' plan began with the mutual release of the T-Virus across the world, such as Tokyo, Japan. At Raccoon City, Alice's colleague and lover Spence was manipulated into stealing a T-Virus sample from the Hive so it could find its way onto the black market as an alternate route. Spence also released the virus into the air conditioning while it was in a temporary airborne state, infecting the entire population of the facility after his escape. Detecting the outbreak, Red Queen responded by asphyxiating staff with Halon gas, drowning researchers with the fire sprinkler system and cutting elevators so occupants would die in crashes. Red Queen however failed to prevent the staff turning into Undead. A nerve gas was also released in the Looking Glass House, rendering Alice and Spence unconscious and amnesiac.

The clone-controlled company was unable to explain Red Queen's actions, and ordered their elite "Sanitation Team" to investigate, under the belief it was only accessible from the Hive. The team, along with Alice; Spence and Alice's contact, Matt Addison, entered the Hive to investigate. Red Queen killed several team members to stop their attempts to deactivate it, though their hacking skills eventually succeeded, and the door locks preventing the Undead from escaping their sealed rooms were released. Red Queen was reluctantly reactivated, but it refused to allow them to escape unless they killed team member Rain, who was too far gone for the Anti-Virus to be effective. Chad Kaplan shut it down once more and the survivors fled the lab, though a released bioweapon left only an infected Alice and Matt behind.

Further into the outbreak, Umbrella was now under the control of the real Dr. Isaacs, though he kept his presence hidden. They were now behind schedule due to the presence of survivors. Under orders, Red Queen provided a clone army at Umbrella Prime with orders to wipe out any remaining survivors. Among the army's targets was Arcadia, an Umbrella ship which was being used to preserve and otherwise experiment on as many as two thousand survivors. Recently liberated by Alice, the survivors were ill-prepared to tackle Red Queen's army and they were annihilated bar Claire Redfield and Alice, the latter of whom was taken to Umbrella Prime for further study. At the facility, Red Queen had the mind-controlled Jill Valentine interrogate Alice for a reason why she betrayed Umbrella, still unable to rule out Alice's betrayal as part of Isaacs' plan. Carefully planned by Isaacs' assistant, Albert Wesker, Red Queen was temporarily shut down by Ada Wong, part of an anti-Umbrella resistance force he set up while feigning betrayal. Alice escaped into the testing chambers with Ada, and the two were marked for death through BOWs and a unit of clone soldiers, while the rest of Wesker's team were attacked by armed Las Plagas Undead. Ultimately however, the two groups met and escaped to the surface, destroying the facility and its cloning laboratory in the process.

Alice; Ada; Leon, Jill and Becky made their way to the White House, which was the last remaining defended outpost commanded by the resistance and now under Wesker's control. Everyone but Alice and Wesker was killed when the White House exploded, with Alice having hid in a bunker and Wesker fleeing. With the remainder of humanity limited to the dozens, Umbrella personnel aware of the doomsday plan rallied towards The Hive, where they were to release an airborne Anti-Virus to finally eradicate the Undead. Red Queen discovered Alice was indeed alive and got in contact with her. It warned her the sole remaining human settlement would be destroyed in two days, and that she had to release the Anti-Virus, unable to resist orders from Isaacs or Wesker.

When Alice and the settlement survivors reached the Hive, Red Queen finally explained the reality of the situation, that it had always intended to prevent the destruction of humanity but was unable to go against executive orders. Alice was thus an unknowing participant in Red Queen's own plan, and she could not let Umbrella release the airborne antivirus as she herself might die from it; for the good of humanity, she could not allow them the chance to create their new world. They were then introduced to the occupants of the Hive, the real Dr. Isaacs, Wesker, and Alicia. Convinced Alice was indeed trust-worthy, Alicia took the opportunity to fire Wesker from the company which allowed Red Queen to kill him. Isaacs then deactivated Red Queen to prevent himself suffering the same fate, though he was mortally wounded when the facility was damaged in an explosion and then killed by one of his own clones who became psychotic at the realization he was not "real". While the main computer was deactivated, Red Queen remained active elsewhere, including a special watch strapped to Alice's wrist and after the release of the anti-virus, congratulated Alice on narrowly avoiding death. With Isaacs now dead, Red Queen had gained control of the company and ordered the army to pull back from its assault on the settlement. It is assumed that she will now help the remnant of humanity rebuild their lost civilization. 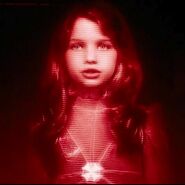