Reid was a member of the BSAA North American Branch operating under Captain Chris Redfield as part of the recreated Alpha Team. During their mission in Lanshiang, while in an engagement with a J'avo-piloted helicopter, Reid had orders to upload new data on the J'avo mutations to headquarters.[1] When the team was going after a giant snake called the Iluzija, he walked into a room and was grabbed by it from above. His body was later discovered by Chris after the team was separated. 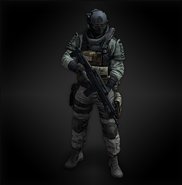 Retrieved from "https://residentevil.fandom.com/wiki/Reid?oldid=811528"
Community content is available under CC-BY-SA unless otherwise noted.