During the development of Shinji Mikami's Resident Evil 4 a number of Ganado designs were considered and rejected. The enemy names are provided by BradyGames Resident Evil Archives II reference book, and may include inaccurate translations from the original Famitsu version.

The Armored Ganado was a prototype to the Garrador enemy. The first design appears very similar with its helmet design. However, it does not have claws and its eyes haven't been stitched. An interesting design choice was to mark the Los Iluminados symbol onto the breastplate.

The second design used an older and bulkier style of armour, with the entire face being hidden from view by the helmet. The breastplate appears to allow the addition of leg plates to form a pre-30 Years' War suit of armour, but the Ganado does not use them. 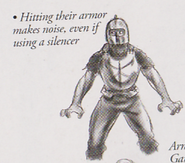 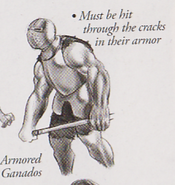 Design 2
Add a photo to this gallery

An enemy known as the "Arcanist" went through at least two different designs before being rejected. In both designs it has three heads and two pairs of hands per arm. In the first design it wears a white robe with black iconography. In its right arm is a forked tentacle which can spray a gas. The second design has no such tentacle, and its robes have switched colours, but the iconography is the same.

Design 2
Add a photo to this gallery

The Assassin bear claw man was to appear in the Castle stage. The design suggests a shirtless Ganado wearing a black mask and armed with long claws attached to his arms. Ultimately the designs for this and the Armored Ganado were merged to create the Garrador miniboss.

The Bound slave was intended to appear around both the Castle and the Island. It was conceptualized as a man in ragged, Arabic-style clothes.

Neither this nor the Harlequin are actually named in the guide. Their names here are tentative.

This Ganado appears a woman in a skin-tight shroud inspired by Arabic dress. The only sign of her affiliation being the tentacles on her right arm, which have replaced her hand.

Neither this nor the Burqa are actually named in the guide. Their names here are tentative.

This female Ganado appears in similar dress to a Medieval harlequin, and carries a sword resembles a medieval flamberge with shortened length.

Masked-type was another female cultist design. She wears fine robes like high-ranking cultists, but has an ornate mask covering her face.

The Mouth-hidden type was to be a variant of the low-ranking plain-black clad cultists, appropriately armed with a scythe. A distinction is that she has a cloth to hide her mouth, allowing only her eyes to be seen.

The Scythe-carrier was a high-ranking Cultist, wearing a ram's skull helmet and black robes. He carries a scythe.

The Super-dynamite man was intended to appear somewhere in the Castle stage to serve as a suicide bomber. He appears to be dressed like the villagers, suggesting he may be one of the miners. He is wearing a vest holding dynamite, and has a torch in one hand which he has used to ignite another two sticks stuck to his head.

The Tattooed-type is a high-ranking cultist. He wears the special robes worn by other commanders; however, his sleeves are removed to display his arm tattoos. He wears a skull like other commanders, but this is a bovine's skull rather than a goat's.

The torch-bearer was a Cultist wearing fine robes and wearing a ram's skull helmet, evidently a high-ranking member. He carries a torch rather than any weapon.

Retrieved from "https://residentevil.fandom.com/wiki/Rejected_Ganado_designs?oldid=810343"
Community content is available under CC-BY-SA unless otherwise noted.