The explosion created by this bomb is very powerful and has a large radius when detonated, often decimating enemies those who are within range of the explosion. Due to its large explosion radius, the player is recommended to clear up some distance before detonating it, otherwise it can heavily damage the player if he/she is caught in the blast.

One notable trick when utilizing Remote Bombs is to perform a slide; if you quickly set it down right when the animation begins, you can set the bomb where you want and get enough of a head start to move away a reasonable distance to detonate it. This is especially useful against enemies whom don't give many openings to set bombs normally. 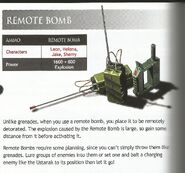 Remote Bomb Description
Add a photo to this gallery

Retrieved from "https://residentevil.fandom.com/wiki/Remote_Bomb_(RE6)?oldid=775635"
Community content is available under CC-BY-SA unless otherwise noted.