Resident Evil: Afterlife (also known as Resident Evil: Afterlife 3D) is a 2010 Sci-fi film. It is the fourth installment in the Resident Evil film adaptations loosely based on the Capcom Survival Horror video game series Resident Evil. It also starts a new Resident Evil film trilogy. The film was written and directed by Paul W. S. Anderson. It is the first film in the series to be released in 3D. It stars Milla Jovovich, Ali Larter, Wentworth Miller, Sienna Guillory, Shawn Roberts, Spencer Locke, Boris Kodjoe, Kim Coates, Kacey Barnfield, Sergio Peris-Mencheta, and Norman Yeung. It was released on September 10, 2010.[2] 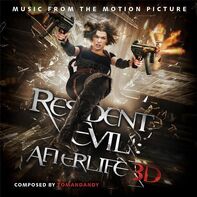 Resident Evil: Afterlife (Music from the Motion Picture) features the film's original score composed by Tomandandy.[3] The soundtrack was released via iTunes on September 13, 2010 and made available on physical formats on September 27. On December 14, Tomandandy released a "Deluxe Digital Edition" that featured four new bonus tracks, remixes of preexisting cues and a digital booklet.

The film also features the use of "The Outsider (Renholdër Apocalypse Mix)" by the hard rock band A Perfect Circle, which was featured heavily in the trailers and promotional material for the film, but is not included on the score. Incidentally, the song was previously included on Resident Evil: Apocalypse: Music From And Inspired By The Motion Picture.

Extras on the DVD include two featurettes ("Band of Survivors: Casting Afterlife" and "Fighting Back: The Action of Afterlife", commentary with writer/director Paul W.S. Anderson and producers Jeremy Bolt and Robert Kulzer and a sneak peek at Resident Evil: Damnation.

The Blu-Ray and 4K releases also include deleted & extended scenes, outtakes, Undead Vision: Picture-in-Picture, and several additional featurettes (including "Back Under the Umbrella: Directing Afterlife", "Band of Survivors: Casting Afterlife", "Undead Dimension: Resident Evil in 3D", "Fighting Back: The Action of Afterlife", "Vision of the Apocalypse: The Design of Afterlife", "New Blood: The Undead of Afterlife", and "Pwning the Undead: Gamers of the Afterlife").