A number of alterations were made after the original Resident Evil release. First off, difficulty was changed to include an "Arrange Mode" and a "Beginner Mode".[2] The Arrange Mode was designed to confuse those who had learned to beat the original game with knives, or who had unlocked the unlimited rocket launcher and had remembered enemy and item placements. As such, items and enemies were moved to other areas of the rooms or to different parts of their respective maps completely. Arrange Mode also gives Chris, Jill, and Rebecca different default outfits, which can be changed back in the dressing room later. The Beginner Mode was included within the game, in which the player's life and their weapons' firepower were increased and the quantities of ammunition and ink ribbons were doubled. Accompanying the item and enemy movements was the camera angle, which was changed in a number of places, noticeably during cutscenes.

The design for the handgun was changed, with the Beretta 92F of the original being replaced with a Beretta 92F Inox in the Director's Cut, with wood grips and is referred to as the Custom Beretta. The Inox has a faster firing rate and the ability to randomly kill certain enemies with one shot. This was the first part of the S.T.A.R.S. handgun's evolution into the "Samurai Edge", which was complete in Resident Evil 3: Nemesis. New enemies were introduced into the game, along with items. Forest Speyer, who appears dead on the mansion's balcony, is capable of being reanimated as a zombie unless under certain conditions (Jill Valentine being accompanied by Barry Burton). Faster-paced (relative to the normal zombie movement) Zombies are also introduced into the game.

The auto-aiming feature that was missing in the English-language version of the original was also corrected, allowing the player to lock onto targets with the press of a button. The game was packaged with a Resident Evil 2 demo (which also contained non-playable demos of Breath of Fire III and RockMan DASH in the Japanese version).

The North American and European releases were marketed as featuring the original, uncensored footage as seen in the Japanese releases. However, the FMV sequences were unchanged from the previous western releases in some areas and were still censored. Capcom claimed the omission was the result of a localization mistake made by the developers and offered the uncensored intro as a free download from their website as appeasement. Despite this, Capcom made no attempt to "correct the mistake" when the Dual Shock version of the game was produced, which featured a new soundtrack in addition to the Dual Shock support. French and German PAL versions of the Director's Cut feature the uncensored FMVs, in colored versions.

The Director's Cut was re-released in 1998, titled Resident Evil: Director's Cut DualShock ver. (バイオハザード ディレクターズカット デュアルショックver., Baiohazādo direkutāzukatto de~yuarushokku ver.?). The main gameplay change is the addition of a vibration function for Sony's DualShock controllers.[2] A new soundtrack was composed for this release as part of a deal with Mamoru Samuragochi, a then up-and-comer Hiroshima musician. Samuragochi himself hired his friend Takashi Niigaki as ghost-composer as part of a longstanding agreement between the two which was only made public in 2014. Niigaki's soundtrack differed radically from the compositions of Makoto Tomozawa, Akira Kaida and Masami Ueda, giving a more gothic horror feel to the game than the electrical music used in the original release. The soundtrack was generally deemed inferior to the original, and the ambient theme for the mansion's basement was considered by some to be one of the worst video game compositions of all time.[3][4][5]

The Japanese release also came packaged with a bonus disc known as the Biohazard Complete Disc, replacing the previous version's Biohazard 2 demo. This disc allows the user to download save data for all versions of Biohazard and Biohazard 2 into their memory card and view footage from the prototype version of Biohazard 2 (Resident Evil 1.5). The North American version was released as part of Sony's Greatest Hits line but did not feature the bonus disc. The FMV sequences were still censored for the North American release, but the game's ad copy on the back of the package was edited to reflect this. There was no European release of the Dual Shock version. 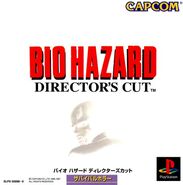 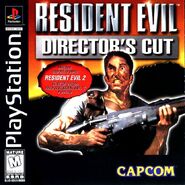 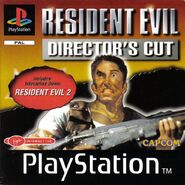 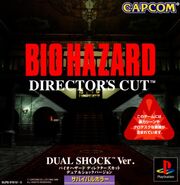 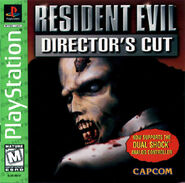 Japanese title screen
Add a photo to this gallery

Retrieved from "https://residentevil.fandom.com/wiki/Resident_Evil:_Director%27s_Cut?oldid=868816"
Community content is available under CC-BY-SA unless otherwise noted.