The game was first released in a base set with a total of 250 cards called Resident Evil: The Deck Building Game Premier Edition. A stand-alone set, titled Alliance was released officially on April 22, 2011, despite earlier releases in some areas.

Outbreak (another expansion released on September 30, 2011), is slightly based around the Resident Evil Outbreak games. This set contained 150 cards, removing the basic resource components from the game's card list, thus requiring having the base game or the Alliance set. This expansion also gave the player a small storage box.[1]

A fourth set (Second Expansion) was announced through various retail websites and confirmed by the development team. This set is titled Nightmare, and is themed primarily around Resident Evil 4. It was released on December 9, 2011.

A fifth set was released in November 2012, titled Mercenaries and is primarily themed around Resident Evil: The Mercenaries 3D. It contains new Skill Cards, and adds a mechanic where Characters earn XP ("Experience Points") that they can use on Skill Cards or Weapons.

Mercenaries was not followed up by any more expansions and appears to be the final set. Bandai's website for Resident Evil: The Deck Building game has been offline since 2013.

The game is very similar to other deck-building games in that the players' respective decks are built over the course of a game. Players randomly pick a character card and then start with an "inventory" of ten cards. These ten cards are taken from the Basic Resources and are included in all game types. They include 1 Handgun, 2 Knives, and 7 Ammo x10 cards. The inventory is shuffled and five cards are drawn. At the end of that players turn they discard their hand and draw a new set. If the inventory is emptied out, the discard pile is shuffled up and converted into a new inventory.

The game can be played with up to four players and turns are taken like in any card or board game.

Once it is a player's turn, they have three abilities:

Players add more cards to their inventory by buying new cards. All available cards are placed in what is referred to as the Resource Area; which is 18 unique stacks of cards which include weapons, ammo, herbs, First Aid Sprays, and action cards. Six stacks of cards, referred to in-game as "Basic Resources" contain Handguns, Knives, Herbs, and all three amounts of Ammo cards (x10, x20, x30). These six stacks are featured in every game scenario. Ammo cards also function as the in-game currency—which is referred to as "gold." The amount of gold you have in your hand is equivalent to the amount of ammo you have in your hand (i.e. if you have 50 ammo, you have 50 gold). Additional gold can be gained through the use of actions or character skills. Players are only allowed one Buy ability per turn, unless another card's effect gives them an additional one.

Actions are blue cards that have special effects. Some allow the player to draw more cards or discard ones they do not need. Others give the player more Buys, more ammo, or allow more Actions to be played. By default, players are only allowed one Action per turn, unless another card's effect grants them another.

The third ability available to the player is Explore. This allows the player to equip weapons and ammo currently held in their hand to explore the Mansion Area. The Mansion Area is a deck filled with "Infected"; zombies and monsters from throughout the Resident Evil series. Players have one Explore by default unless another card's effect says otherwise. Multiple Explores allow the player to either fight multiple Infected or fight one after another. However, weapons can only be used once per turn, leaving everything up to the player's discretion. Infected must be defeated to earn Decorations. Character cards unlock new skills as the player earns decorations.

The player with the highest number of decorations wins the game, but the game does not end until a particular Infected in the Mansion Area is defeated. This is often the Infected card with the highest amount of health.

The game began with only three modes of play, with a fourth added in Alliance and a fifth added in Outbreak. All modes are essentially played the same way but add additional rules, conditions, and cards. Each mode has Scenarios which determine what cards are placed in the Resource Area. The game manual has preset scenarios but it encourages players to make their own to create new styles of play. Note that the Skill System introduced in the Mercenaries expansion is not a proper game mode unto itself but it is a way to modify the rules of any of the modes listed below.

All but one set comes with ten character cards. Mercenaries has only eight. In addition, ten promotional character cards have been released. All main series protagonists (and some antagonists) have been included. Characters who have made frequent appearances in the video games, such as Chris, Jill, Leon, and Claire, have multiple cards with different likenesses. Each character card has one or two unique skills that allow players to exploit different facets of the game. These skills are unlocked by earning decorations from defeated Infected. The Outbreak expansion introduced Infected Character cards, which are zombies that regular characters turn into if their Infection Level maxes out. (See "Infection Mode" below).

The Mansion Area features various enemies from the series. They are encountered only when players Explore and if they are defeated, they are attached to character cards and tallied up as decorations. Infected that are not defeated do damage to one or more players, are sent to the bottom of the Mansion Area deck, and may also use a special skill of their own.

In addition to Infected, a player who Explores the Mansion Area may instead draw a Token or an Event card. Tokens include bonus items such Yellow Herbs, Time Bonuses (Mercenaries Mode only), or powerful weapons that can be utilized by the player. Event cards are obstacles like trap doors or exploding barrels that can do damage to one or more players.

These include healing items like Green Herbs, Red Herbs, and First Aid Sprays.

Ammunition Cards come in varying amounts and as stated above represent both ammo and gold.

The game uses many weapons, which are organized into "types". Most of the weapons are from different points in the series, but primarily come from RE4 and RE5. Here, they are not given their model names as they do in-game; but are simply given shorthands like "Handgun" or "Machine Gun". Weapons are organized into various decks in the Resource Area, and some include a "special weapon"; a more powerful variation of the weapon type. Naturally weapons require ammo, though there are many exceptions such knives and stun rods. 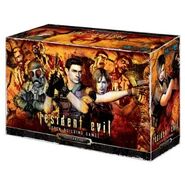 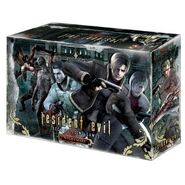 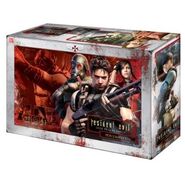 Examples of a Character card and an Infected card.
Add a photo to this gallery

Retrieved from "https://residentevil.fandom.com/wiki/Resident_Evil:_The_Deck_Building_Game?oldid=858999"
Community content is available under CC-BY-SA unless otherwise noted.