Resident Evil: The Final Chapter, formerly referred to as "Resident Evil 6", is a 3-D science-fiction action/horror film written and directed by Paul W. S. Anderson. It is the sixth and final installment in a series of film adaptations based loosely on Capcom's survival horror video game series Resident Evil. 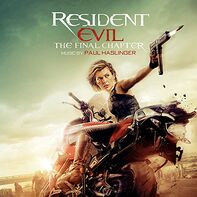 Resident Evil: The Final Chapter (Music from the Motion Picture) features the film's original score composed by Paul Haslinger.[5] The soundtrack was released on January 27, 2017.

The song "Paradise City" by the hard rock band Guns N' Roses was featured heavily in the trailers and promotional material for the film, but neither appears on the soundtrack nor in the film itself.

Sony Pictures Home Entertainment released Resident Evil: The Final Chapter digitally on May 4, 2017 and on DVD, Blu-Ray, and 4K Ultra HD on May 16, 2017.

Extras on the DVD include two featurettes ("The Bad Ass Trinity & The Women of Resident Evil" and "Explore the Hive".

The Blu-Ray and 4K releases also include "Retaliation Mode" (a thirty-minute commentary with writer/director Paul W.S. Anderson and Milla Jovovich on key moments of the film), an additional featurette ("Stunts & Weaponry") and a sneak peek at Resident Evil: Vendetta.[6]