Resident Evil: Village, stylised as RESIDENT EVIL VII.I.AGE and known in Japan as BIOHAZARD VILLAGE (バイオハザード ヴィレッジ, baiohazādo virejji?), is an upcoming first person Survival Horror title developed by Capcom. It will be released in 2021. It will be the first Resident Evil game for the ninth console generation, though Capcom has gone on record as exploring the possibility of an eighth generation version.

The story is set in an isolated mountainous region around a village and medieval castle, where Ethan and Mia Winters fled in the years following the events of Resident Evil 7: Biohazard. During the events of the game, an apparent Blue Umbrella operation led by BSAA Cpt. Chris Redfield assaults the village, sending the two men on radically different paths.

The game is designed in a similar manner as 2017's Resident Evil 7: Biohazard, being a first person game with Survival Horror gameplay mechanics. The enemies are currently not yet known, though one of the enemies is human with canine attributes, invoking a mutation comparable with werewolves. These enemies can hunt the player in packs to be more dangerous. Like Resident Evil 4 and Resident Evil 5, this game uses its own currency mechanic. In this case, it uses the Leu, the name of Romania and Moldova's respective currencies.

The game entered production sometime just before or after the release of Resident Evil 7: Biohazard, and it was felt the game should be a continuation of that game's story. In designs for the village itself, art director Tomonori Takano was tasked with creating a foreboding environment that would have its effects even in the daytime setting. Feeling the story might become complicated for the player to remember, a storybook was designed that the player would read to get a summary.

A large castle overlooks a village.

The villagers are shown to rely on subsistence agriculture, growing cereal crops.

A large stone door. Like Resident Evil 4, it appears to require the insertion of stone tablets to open. The relief design is satanic in nature.

An ornate display of symbols, possibly heraldic. In the centre is the Umbrella Pharmaceuticals logo or, otherwise, the device of Oswell E. Spencer, Earl Spencer.

The seemingly main hall of the Castle. It bears similarities to the Spencer Mansion's Entrance hall. 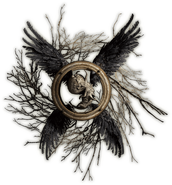 A mysterious symbol used in the village.

Resident Evil: Village poster.
Add a photo to this gallery

Retrieved from "https://residentevil.fandom.com/wiki/Resident_Evil:_Village?oldid=850920"
Community content is available under CC-BY-SA unless otherwise noted.