Resident Evil: Welcome to Raccoon City is a 2021 horror film directed by Johannes Roberts. The seventh film in Constantin Film's live-action franchise, this film is a reboot set in a new continuity separate from the prior universe overseen by writer-director Paul W.S. Anderson which ended with 2017's Resident Evil: The Final Chapter.[6]

The film is an adaptation of both Resident Evil and its sequel and borrows elements from the original games as well as the modern remakes.[7] The film stars Robbie Amell, Hannah John-Kamen, Avan Jogia, Kaya Scodelario, Tom Hopper and Neal McDonough.[8] 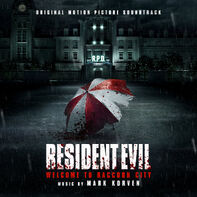 The film also features the use of several songs not included on the score, including (arranged by chronological appearance):