Resident Evil (バイオハザード, spelled Baiohazādo or simply Biohazard in Japan) is a survival horror game by Capcom and is the first game in the Resident Evil series. It was originally released in 1996 for the PlayStation and has been subsequently ported to the Sega Saturn and PC, then re-released twice on the PlayStation in the form of a Director's Cut. A Game Boy Color version of Resident Evil was planned, but later canceled by Capcom, citing that the port was of poor quality. Capcom later released a new game in the series for the platform titled Resident Evil Gaiden. In 2002, a remake of the game was released for the Nintendo GameCube featuring new graphics and voice acting among other significant changes. A Nintendo DS port of the original, with added modes and the subtitle Deadly Silence, was released in early 2006.

While not the first survival horror game, its success propelled the genre to new heights of popularity and was the first game to coin the term.

Note: While attempts have been made to reconcile plot elements between the 1996 and 2002 versions, there may still be some discrepancies.

Unlike subsequent Resident Evil games, the first game had live-action openings and endings. The acting and dialogue in these scenes are often mocked (as is the general dialogue in the series), but some argue that the unrefined, campy and poor execution perfectly fits the mood of a B-grade horror movie, although the majority of the series' fans continue to mock the opening, as it completely off-sets the other-wise horror-driven mood of the game. The opening footage in the western releases was significantly re-cut to exclude most of the gore, (And Chris lighting a cigarette) using alternate footage. Capcom was supposed to include the unadulterated version of the intro in later revisions, but only the PC Version as well as the German and French PAL PlayStation Director's Cuts contain the original FMV.

The gameplay environment consists of polygonal 3D characters placed over pre-rendered 2D backgrounds. As such, the game relies on pre-determined camera angles for view of the action instead of a real-time camera like most games. As a result, the game uses a "tank-like" control scheme where the character controls in a first person manner. Instead of moving the character in the direction the player is pushing, the character moves forwards by pressing up and backwards by pressing down and turns the character on the spot by pushing left or right. Many Resident Evil detractors have criticized this control scheme, claiming it unsuitable for a third-person action game, but many fans have defended it, arguing that it added to the feeling of death and defeat and that a conventional third person control scheme would be infeasible considering the various camera angles.

The player fights against enemies by arming their character with a weapon. The player draws their weapon by holding down the "Weapon Draw" button (usually a shoulder button, such as the R1 button) and pressing "Fire" (or X button) In the attack stance, the player character remains static in one place and can turn their character and/or tilt their weapon up or down. Initially, the only weapons available to the player are a combat knife and a Beretta 92FS, but later in the game, more weapons become accessible to the player such as the Remington M870 and a Colt Python. Ammunition for firearms is limited and it is often recommended that the player save their strongest weapons for boss battles.

The player must survive by fighting against the various monsters that populate the mansion. The most common enemies in the game are zombies, which are slow-moving and easy to outrun, but harder to avoid in tight corners. During later sections of the game, the player must also fight against zombie dogs (known as "Cerberus'"), Hunters, Chimeras and Web Spinners, as well as small enemies such as crows, wasps and adders. The latter three are small and fast, and the player must be careful to conserve ammunition when dealing with these. The player must also fight against bosses such as a giant snake (Yawn), a mutated plant (Plant 42), a giant spider (Black Tiger), a giant shark (Neptune), and the Tyrant T-002.

Health is restored by using first-aid sprays or healing herbs. Of the two, healing Herbs are more common and restore a portion of the player's health, while first-aid sprays are scarcer, but will restore the player's health completely. There are three types of healing herbs available: the green herb (for restoring health), the blue Herb (which cures poison) and the red herb (which can't be used by itself, but will triple the healing power of a green herb when mixed with one). The herbs can be mixed and used in six different combinations.

The player must navigate through the mansion by picking up various keys and items which are pivotal to the game's progress, while solving puzzles along the way. The player has a limited capacity for carrying items and thus, enforcing the need to carry only essential items while still having space for new items. As such, storage boxes are available for the player to store any item for later use.

The player can only save their progress by going to a typewriter and using ink ribbons to save the game. Ink ribbons are available in limited quantity, forcing the player to seriously consider whether they have made enough progress to justify saving the game. This saving method has also been criticized by many, but designer Shinji Mikami defended, arguing that it increases the tension in the game.

There are also various documents available to the player within the mansion which either serve to provide the solutions to certain puzzles, or simply to further divulge the plot.

The game gives the player control of S.T.A.R.S. Alpha team members Chris Redfield or Jill Valentine as they search for a way out and attempt to locate the S.T.A.R.S. Bravo team. The characters play out similar scenarios but they have different skills. Chris is assisted by Bravo Team medic, Rebecca Chambers (who becomes playable in certain portions of his scenario), while Jill gets help from fellow Alpha team member, Barry Burton. Jill's quest is easier because she has a higher item-carrying capacity (eight compared to Chris' six), can pick simple locks, and has a comparatively stronger team-mate. She also has access to a grenade launcher (Chris has very limited access to a flamethrower) and can complete certain puzzles by herself, while Chris needs Rebecca's help in certain areas. Chris' limitations make his quest arguably more difficult but he has more stamina than Jill, and can therefore sustain greater damage and run faster. He also has better accuracy than Jill, meaning more chances to score headshots and less ammunition spent.

Resident Evil gives players a choice between two playable characters, S.T.A.R.S. Alpha Team members Chris Redfield and Jill Valentine. The differences between both characters are more than superficial, with differences in abilities, items and even supporting characters, resulting in a slightly different scenario for both characters. Later Resident Evil titles would often follow this tradition of including a male and female lead, although in some, they aren't both available at the start of the game (i.e. Code: Veronica). Notably, Resident Evil Zero has players control both protagonists simultaneously.

The character who is not chosen becomes a prisoner of Wesker until the end of the game. In order to unlock the passage leading to the cell, three MO Disks must be collected by the player and then inserted into terminals (which are apparently modeled off of GameCubes in the remake) located throughout the lab. The cell's door can only be unlocked by activating the self-destruct mechanism or by using Wesker's Master Key. Deciding whether to free them or not affects several of the ending cut-scenes.

Most of the other members of S.T.A.R.S. make minor appearances throughout the games, usually as victims of the monsters. In later versions, Forest appears as re-animated corpse, while Richard can survive if given the serum within a certain amount of time.

The PlayStation game was a best seller in North America. The game received positive reviews from critics. For example, GameSpot praised the game,while Computer Gaming World gave a more mixed review for the PC version in explaining that they "tried to hate it with its graphic violence, rampant sexism, poor voice acting and use of every horror cliché however...it's actually fun."In total, according to Capcom's Investor Relations website, the original Resident Evil has sold 2,750,000 units. The GameCube remake of Resident Evil sold 1.35 million units in total.GameSpot said this about the remake: "Capcom has nearly perfected its craft and created the best Resident Evil ever". IGN mentioned at the time that the remake was "the prettiest, most atmospheric and all-around scariest game we've ever played". Despite positive success the game has been criticized for it's terrible dialogue and voice acting.

A novelization of the game titled Resident Evil: The Umbrella Conspiracy Side A, was written by author S.D. Perry as the first book in her series of Resident Evil novels. The novel combines both Jill and Chris' scenarios into one narrative and features all five of the main characters (including Barry and Rebecca).

The book also takes liberty with the original source materials; the most notable difference being the inclusion of an original character named Trent, an insider from Umbrella who provides Jill with information about the Mansion prior to the events of the mansion incident. Since the book was written a few years before the GameCube remake, the novelization omits the presence of Lisa Trevor in the mansion. However, the book does allude to the original version of George Trevor's Journal from The True Story Behind Biohazard, as well as the short story it contained Biohazard: The Beginning, which involved the disappearance of Chris' friend, Billy Rabbitson. Another notable difference in the novels is moving the location of Raccoon City from the Midwest to Pennsylvania, apparently about an hour's drive from New York. 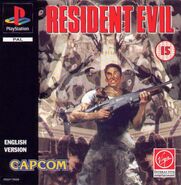 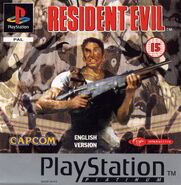 Resident Evil -PC/Windows
1997
Add a photo to this gallery

Retrieved from "https://residentevil.fandom.com/wiki/Resident_Evil_(1996_game)?oldid=150098"
Community content is available under CC-BY-SA unless otherwise noted.