Single-player
Resident Evil 4 Preview Disc, known in Japan as Biohazard 4 Trial Edition, is the official trial edition for Resident Evil 4. It was released in Japan; the United States and Europe in late 2004. In Japan it could be purchased from September 2004 as part of the biohazard DOUBLE FEATURE or an extra in a copy of Famitsu. The US version was released as a gift to people who pre-ordered the game in December 2004.

The Trial Edition is a playable demo of the main Village stage, it starts at the Footpath to the village and ends at the Village center after the church bell rings.

The knife in this version (dubbed "Combat Knife") is a weapon inside the inventory screen, when using the knife the camera also doesn't zoom in like in the final version (or when aiming). The binoculars instead have the "knife property" where Leon can equip it at any time in this demo without going into the inventory screen. The player is able to zoom in and out just like in the final version of the game.

The English version of the trial seems to be an older version of the demo, the inventory screen is more reminiscent to past Resident Evil games' inventories where most items are placed into single boxed spaces, the Shotgun in the English demo only takes one space in the inventory screen. The Japanese version has the Attache Case and the "tetris-like" customization of it where the player can turn objects around to fit better or organize it.

In the trial version there is also a "movie" option where it shows the E3 2004 trailer of the game that showcases points of the game not present on the demo version, but are in the final version. Some features shown in this trailer are different than the ones in the final release, such as: 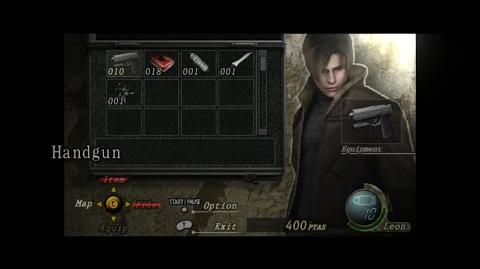 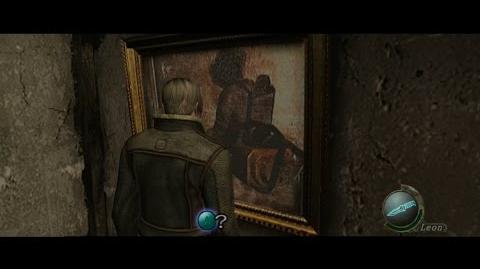 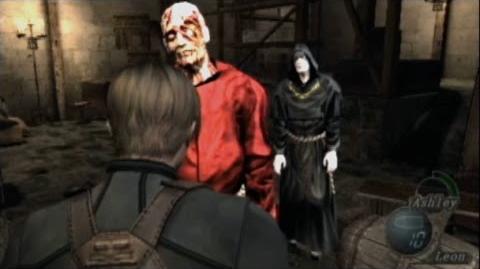 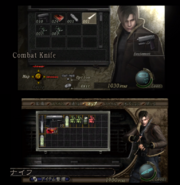 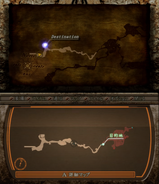 (top) The English map screen and (bottom) the Japanese map screen in the demo.

Luis in the "movie", notice the small beard.

A Chainsaw Man picture showing him without his mask, this was removed in the final version.