The Resident Evil 5 Benchmark is a free tool made available by Capcom for players to test how their computers handles the game. The content in it revolves around scenes in the Public Assembly, Bridge and the Oil Field - Dock, depending on the mode chosen. There is no gameplay to the benchmark, everything seen are real-time cutscenes or gameplay videos played by an A.I while a frame-per-second counter is shown plus the computer's specs below it.

Three options are available in the main menu, one for customizing the graphics settings, and a "variable" / "fixed" benchmarks.

The fixed benchmark displays one real-time scene with multiple Majini in the Public Assembly area looking up to the Agitator Majini and an Executioner. The camera angle changes multiple times to display various angles which show varying numbers of enemies on-screen. Chris and Sheva are never shown on this one.

The variable benchmark starts with the Hospitality cutscene then displays gameplay played by an A.I in the Public Assembly, then the Bridge and finally at the Oil Field - Dock. These fours instances are dubbed 'Area 1', 'Area 2', 'Area 3' and 'Area 4' in the Results screen.

In both modes, once the scene is finished, a Results screen is shown which displays a rank based on how well the computer handled the benchmark. Different ranks displays a different background image and text during this screen. 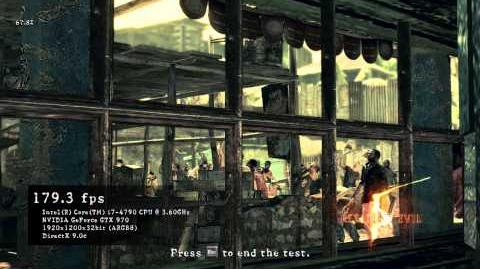 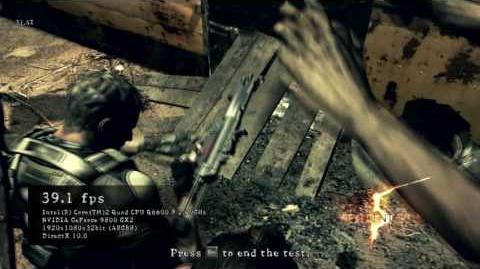 Retrieved from "https://residentevil.fandom.com/wiki/Resident_Evil_5_Benchmark?oldid=675093"
Community content is available under CC-BY-SA unless otherwise noted.