After the registration process, users obtain their own page and a card displaying their number and registration date. Ambassadors will also start receiving promotional e-mails about the Resident Evil series (for example, in 2016, ambassadors received a teaser e-mail about the Dummy Finger within the Resident Evil 7 Teaser Demo: Beginning Hour after the demo had been downloaded over two million times).[3]

In 2019, Japanese ambassadors received an e-mail from the program which invited them to test a game that was still in development.[4] This game turned out to be Resident Evil: Resistance.

During a promotional campaign with CLUB96, ambassadors had double the chance to win an invitation to the BIOHAZARD THE EXTREME attraction at Universal Studios Japan.[5]

On September 2019, PS4 users had to sign up to the ambassador program in order to register for the Project Resistance closed beta.[6]

In August 21, 2020, the UNDER THE UMBRELLA project was announced via an e-mail sent to ambassadors, it was launched the same day on RESIDENT EVIL.NET.[7]

On January 2021, users had to sign up to the ambassador program in order to register for theResident Evil RE:Verse closed beta. The higher the user's rank, the bigger the chance they would be selected for the beta.[8]

On January 1, 2020, the site had a major update where users could now "rank up" based on certain actions, and the user's card could be customized for the first time. The customization include the following:

Zombie (the image file in the site calls it "Wesker")

Mr. Raccoon (Added on Christmas 2020)
Add a photo to this gallery

On April 2020, the cards were changed slightly to include words that would make out "#Stayhome" and "#Playgame", this being a reference to the state of the world at the time due to COVID-19.

Each of these images will change to another once the user reaches the platinum rank, with the Zombie image turning into an Albert Wesker image with his look from Resident Evil: Revelations 2.

The icon image can also be changed, users may choose either their Twitter, RESIDENT EVIL.NET or Resident Evil Portal profile pictures as the icon.

There are currently four ranks in the system, Bronze, Silver, Gold and Platinum. Bronze is the default rank, with users requiring 200 points to rank up to Silver, 500 for Gold and 1000 for Platinum. Users with the Platinum rank will be eligible to certain privileges related to the series which may include:

On June 25, 2020, the site had another small update. The background was changed to that of Resident Evil Village and a new "Earned Points History" section was added at the bottom of the user's page which displays where and when every point was earned.

Between October 22 - November 03, 2020, the Halloween promotion was available where users could obtain a special card based on a lottery system. Every time an user would log in to the site, they had a pre-determined chance of winning the new card, this chance was increased based on the user's rank:

In order to rank up, users may do the following:

If an user experiences issues with their account or points, they may use a special form set up by Capcom in order to contact the Ambassador Program Support.[10]

After the user reaches the platinum rank, the point system will be gone and instead an Umbrella logo with a small Mr. Raccoon within it will take its place. As the user keeps earning points, the Mr. Raccoon will appear more and more on the logo. It is unknown what happens once the Umbrella logo completely vanishes. 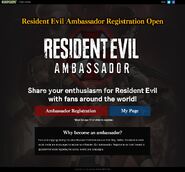 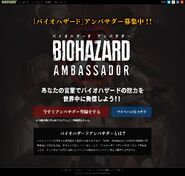 Image shown if the user won the Halloween 2020 card 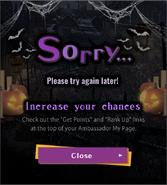 Image shown if the user didn't win the Halloween 2020 card 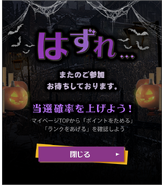 Japanese ver.
Add a photo to this gallery

Retrieved from "https://residentevil.fandom.com/wiki/Resident_Evil_Ambassador?oldid=863735"
Community content is available under CC-BY-SA unless otherwise noted.