Resident Evil Code: Veronica (BIOHAZARD CODE:Veronica in Japan) is the fourth game in Capcom's Resident Evil survival horror series originally released for the Sega Dreamcast in 2000. The game takes place on December 27th, 1998, three months after the events of Resident Evil 2 and Resident Evil 3: Nemesis. It is the first Resident Evil game made for a sixth generation console and the first game to use full polygonal environments instead of the static, pre-rendered backgrounds that characterized the previous installments.

It has been three months since the total destruction of Raccoon City, and Claire Redfield is still searching for her missing brother, Chris. Claire's search takes her to an Umbrella owned facility in Paris where she is discovered and met with fierce resistance. Claire attempts an impressive escape from the clutches of the hired soldiers, but it proves to be just not enough.

Resident Evil Code: Veronica is the first Resident Evil game to use a 3D background instead of pre-rendered ones. However, the player still has no control over the camera as it swings between semi-fixed angles and the skybox is pre-rendered. Two weapons (Sniper Rifle and Linear Launcher) can be fired from the character's view and the unlockable minigame has a first person mode available.

Many features have been brought over from RE3 (since both were created in tandem) such as oil drums and a 180 degree turn. Items from Resident Evil 2, such as upgradeable handgun parts and "side packs" for larger item capacity are featured, as well as new weapons such as explosive crossbow bolts and Anti-B.O.W. rounds for the grenade launcher. A unique feature is the ability to dual wield pistols, letting the player target two enemies at once. Some less dynamic changes are the addition of continues and the ability to pick up and use herbs when one's inventory is full.

There are three protagonists, Claire Redfield, Steve Burnside and Chris Redfield. However, unlike the first two games where the player could choose which character they want to play as, the player is forced to control Claire for the first half of the game and then complete the second half with Chris. Steve Burnside is briefly playable in Claire's half of the game as Claire is also playable in Chris' half for a short period of time.

After completing the main game, a Battle Game mini-game is unlocked in which the player is able to choose one of five characters (Claire; Chris; Steve;Wesker]] and an alternate version of Claire) and clear rooms of enemies until they reach a character specific boss. There is a hidden room in the Battle Game with a slot machine that gives you items and a journal or diary belonging to someone named D.I.J.. During the Battle Game mini-game each playable character has a bonus motion, for example Chris can examine the tiger statue and Clarie is affected when she just walks through a certain cold area.

An updated version of Code: Veronica, known as Code: Veronica X (Code: Veronica ~Complete Edition in Japan) was made for the Dreamcast (Japan only) and PlayStation 2 in 2001, with a GameCube port released in 2003. It had minor improvements overall, some of them being: better graphics, nine minutes of extended cutscenes which involve Claire and Wesker meeting briefly, an extended fight scene between Alexia and Wesker, as well as an extra fight scene between Wesker and Chris in which Wesker states that he may be able to revive Steve. 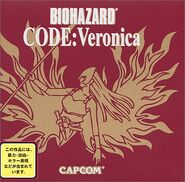 Retrieved from "https://residentevil.fandom.com/wiki/Resident_Evil_CODE:_Veronica?oldid=218969"
Community content is available under CC-BY-SA unless otherwise noted.