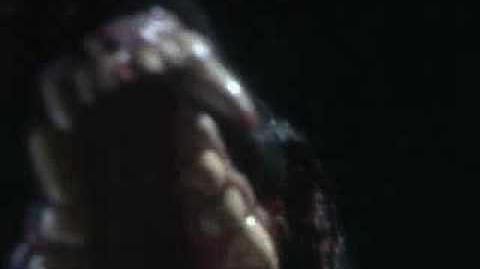 The scene begins with Chris Redfield narrating, as the S.T.A.R.S. Alpha Team's helicopter searching the forest. The searchlight finds the crashed Bravo Team chopper. Joseph's shoulder-cam shows that he is inside the aircraft, looking at what appears to be a person sitting in the pilot's seat in front of him. The camera moves to reveal that the mission's helicopter pilot, Kevin Dooley, is dead. Joseph reacts to this by leaving the helicopter in panic, nearly tripping. Joseph hears an unusual sound and turns to where it came from with his shotgun. Finding nothing there, he lowers his weapon and sighs in relief. To his right, a dog runs up to him and jumps, biting him near the neck. Joseph screams. The other S.T.A.R.S. members hear him fire at the dogs. Gunshots from Jill and Joseph do not show that they managed to hit any of them on the camera, as he is attacked by a number of dogs on the ground. His shoulder-cam falls off and continues to record his death. As his screams become silent and Jill uses up her 15-bullet magazine, she can only watch the dogs finish their meal. As one dog notices her, Jill slowly backs away. Other dogs also finish eating and stare at her -the first dog then charges her. Jill falls down and is about to be killed by the leaping dog, but Chris manages to shoot it in the air. Chris picks Jill up. Three, and later five of the dogs pursue Chris and Jill. Chris looks up to see their helicopter fly away. Chris stops and turns around as a dog leaps at him. Covering his arm to protect his face from being bitten, he is saved by Captain Wesker, who fires at the hound. Chris and Jill are reunited with Wesker and Barry, and run away from the pack together. Barry looks back to shoot at the dogs while on his way, killing at least two. Chris and Wesker then do the same. The camera shows a building in the distance.

Chris (narrating): "Alpha Team is flying around the Forest zone situated in north-west Raccoon City, where we're searching for the helicopter of our compatriots; "Bravo Team", who disappeared during the middle of our mission."

Chris (narrating): "Bizarre Murder cases have recently occurred in Raccoon City. There are outlandish reports of families being attacked by a group of about ten people. Victims, were apparently eaten. Bravo Team went to the hideout of the group, and disappeared."

Chris (narrating): "It was Bravo Team's Helicopter. Nobody was in it. But strangely, most of the equipment was still there. However, we soon discovered why."

Chris: "Jill, run for that house!"


If the player decided to play as Chris

Chris (narrating): "There are only three S.T.A.R.S. members left now. Captain Wesker, Jill, and myself. We don't know where Barry is."

Retrieved from "https://residentevil.fandom.com/wiki/Resident_Evil_Opening?oldid=839975"
Community content is available under CC-BY-SA unless otherwise noted.