The album was re-released for a European and American audience by Pioneer LDCE and Viz Music, respectively. All compositions were rearranged by Makoto Tomozawa and mixed in QSound technology.

The music itself was composed by Makoto Tomozawa; Akari Kaida, and Masami Ueda. Of the team, only Masami Ueda returned to the series.

The booklet provided with the game included added backstory for the game. Most noticeably is the existence of a larger S.T.A.R.S. organization reaching out much further than Raccoon City; taken from Western sources that established their iterations also as national organizations.

Albert Wesker is described as a man who ascended quickly through the organization's ranks, later founding the Raccoon City branch. Barry Burton's former employment as a SWAT member is brought up.

Chris Redfield is established as having been discharged from the US Air Force, and befriending Barry while a drifter. Barry later recruited him for the "newly-formed" S.T.A.R.S. organization. He; Barry and Jill Valentine were later reassigned to the Raccoon City branch. 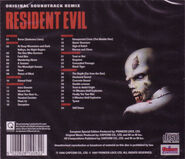 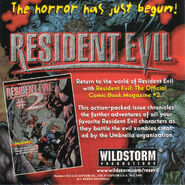 Booklet back cover (US)
Add a photo to this gallery

Masami Ueda is the only member of the original composing team who continued on to score several more entries in the Resident Evil series.

Retrieved from "https://residentevil.fandom.com/wiki/Resident_Evil_Original_Soundtrack_Remix?oldid=857608"
Community content is available under CC-BY-SA unless otherwise noted.