The registration for the beta was the same for both platforms:

The user must first have registered to the Resident Evil Ambassador program and have a CAPCOM ID linked to it, then signed the online form to enter for a lottery.

The Resident Evil Ambassador rank of the user boosted the chances of winning, with silver ranked users having x2 chance, gold at x5 and platinum at x10. Bronze ranked users did not receive any bonus.

On January 27, the @REBHFUN Twitter account announced that they would be giving away 30 codes for the closed beta to PlayStation users who replied to their tweet.[3]

Only Deathmatch was playable in the closed beta, where players were pit against each other without any teams. There was a tutorial option which could be replayed infinitely, and when the beta was first booted up, it would ask the player if they would like to do the tutorial first. There was no invite system nor a way to host friend matches.

In the menu, players were able to see information about the Survivors and Bioweapons, which showed their stats, weapon loadout, skills and how many Virus Capsules were needed to spawn (in the case of a Bioweapon).

"R.P.D." was the only playable map, however the Tutorial takes place in "Uptown".

Capcom made an online survey about the closed beta between January 28-February 3.[4] This survey was e-mailed to Resident Evil Ambassadors.

The following are the patch notes based on the PS4's "Update History" menu:

In some instances, players would start matches with a kill streak of 10. This was only a graphical glitch as the bonus points would not be awarded once the player earned a kill.

Boot-up screen on the PS4 version

Notice about the beta

Notice given when the beta was under maintenance

Notice asking the player to do the Tutorial first 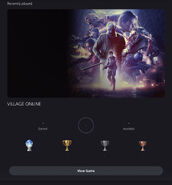 Retrieved from "https://residentevil.fandom.com/wiki/Resident_Evil_Re:Verse_closed_beta?oldid=867222"
Community content is available under CC-BY-SA unless otherwise noted.