Reynard Fisher (レイナード・フィッシャー?) was an agent within the Bioterrorism Security Assessment Alliance's West African branch[1] who provided information and weapons to Chris Redfield and Sheva Alomar within the Kijuju Autonomous Zone.

Fisher once worked for the Ministry of National Security of an African[2] country.[3][excerpt 1] Experienced in infiltration, he was hired by the BSAA as an infiltration agent. In late 2008, Fisher operated within the Kijuju Autonomous Zone, where he was to observe for signs of bioterrorist activity in the country, which was still recovering from a civil war. Among the spies under his employ as a local butcher, and they were able to hold meetings at his shop so as not to arouse suspicion.[4]

In early 2009, Fisher became suspicious that a spate of animal slayings and Islamist linked violence were related to bioterrorism, and theorised it was caused by a mutant Plaga species smuggled into the city after reading a local blog. During these early killings, the butcher was killed, and Fisher took over the butcher's shop while continuing his research, lacking any definite proof of any bioterror link. Fisher eventually reached a breakthrough when he photographed Islamist rebels holding a meeting with an American later identified as Ricardo Irving, a suspected bioweapons smuggler. This, however, was treated by the BSAA's branch headquarters only as evidence of a dealing, and not of the wider violence being the result of it. Fisher continued to remain in Kijuju as the civilian supporters of the Islamist rebels switched from murderous to passive-aggressive behaviour, and observed talk of the Uroboros Project, a doomsday project he had heard of before.

In March 2009, the BSAA operation to arrest Irving took place. Fisher met with Chris Redfield and Sheva Alomar in civilian dress and provided them with their firearms which he had smuggled in. Soon after they left, the civilians turned on him and brought him as a prisoner to their leader, the Instigator Majini. There he was beheaded by the Executioner Majini in front of a crowd.

Reynard makes an appearance at the RE5 hub of PlayStation home. He stands outside the building he is first encountered in. He has two options, the first option being showing ID (which is RE5 save data). Having ID allows players of RE5 to go inside the building. The second option, available to any person is a bug hunt minigame where Reynard times the players as they break crates to search for Brown, Green, Gold, and Jewel Beetles, offering any beetles the player finds as a decoration reward. Inside the building, Reynard has two new options. The first option is to "Check Mission Status". If the player has all of the beetles, Reynard will reward the player with a pair of Wesker's sunglasses. The second option allows the player to read "top secret" BSAA documents in the following room (which is the room where Reynard gives Chris and Sheva their pistols). In both inside and outside the building, he leans against the door exactly as he does when first encountered by Sheva and Chris. 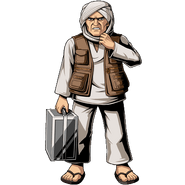