Ricky Tozawa is the nephew of Doug Wright and one of the main protagonists of Resident Evil: The Marhawa Desire.[1]

Ricky is a 20-year-old college student who lost his mother at age 12. Since then, he has been cared for by his uncle and established a strong relationship with him. He also attends Bennett University, which is the same University where his uncle teaches.

In 2012, Prof. Wright requested that Ricky join him in investigating a request from Mother Gracia Delenikas, head of Marhawa Academy. While Ricky was initially drawn into the academy by its female students, he began to work with Doug in finding the source of the outbreak, initially presumed to be a case of the t-Virus, and quietly stop it without letting any word escape to the students.

When Ricky was bitten by a zombified Alisa Lin, however, his lack of any symptoms the morning after helped Wright to confirm that the outbreak was not a strain of t, but rather something else.

Ricky soon developed a crush on Bindi Bergara and revealed the truth of his investigation after the two of them witnessed the burning of the infected Alisa and Ra-Na Bae in an effort to cover up evidence.

After further investigations on the campus lead to another attack by the mutated Nanan Yoshihara. With Wright badly injured in the process, Ricky was forced to kill the C-Virus-infected Tahir Kapoor. Furious with Mother Gracia's attempts to continue covering up the spreading outbreak, Bindi revealed her involvement with the outbreak to Ricky after injecting herself with the C-Virus and knocking him unconscious.

Awakening to a full-blown outbreak, Ricky forced his way through the campus to escape Bindi's assault and rescue Wright. Pushed to his limits and seemingly trapped, he attempted to commit suicide before being rescued by Chris Redfield and the BSAA. Their efforts to rescue Wright proved futile, however, when he was found already infected by Nanan in his room. He tells Chris what happened and telling him that Bindi was behind this. Ricky forced Chris away in order to take responsibility by finishing off Wright himself.

The pair made their way into the basement of the campus, where they encountered the further mutated Nanan and a mysterious cloaked figure. Ricky went after the mystery assailant, only to be pinned down and nearly injected with the C-Virus himself before Nanan attacked, destroying the syringe. Once free, he helped ventilate the area of any C gas in order for Chris to subdue Yoshihara.

After the incident at Marhawa Academy, he worked as a freelance photographer, being on the scene of the 2013 Lanshiang bioterror outbreaks. While taking photos of Chris and Piers during their mission, he was able to rescue a mother and child from a group of J'avo, telling himself that he would let Chris handle things from there. 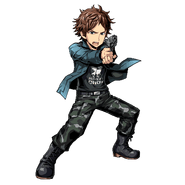 Ricky in Clan Master.
Add a photo to this gallery
Sources
Retrieved from "https://residentevil.fandom.com/wiki/Ricky_Tozawa?oldid=760822"
Community content is available under CC-BY-SA unless otherwise noted.