View source
watch 02:53
GTA: The Criminal Enterprises - The Loop
Do you like this video?
Play Sound

The Riot Gun is a shotgun in Resident Evil: Operation Raccoon City. It is a powerful, semi-automatic shotgun with decent range and accuracy, but suffers from a slow reload speed and an insufficient amount of reserve ammunition.

The Riot Gun has 7 rounds in its magazine and 28 spare rounds initially. The maximum spare rounds amount can be raised to 42. When reloading the shotgun, the character will upload the shell one by one. This sequence can be stopped by firing or doing another action. When the ammo is restored with ammo boxes or stashes, the shotgun becomes fully loaded instantly. 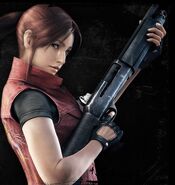 Beltway is shown with Riot Gun during the Triple Impact trailer.[1]