Rita Philips[2] was an officer of the Raccoon City Police Department who survived the disastrous Raccoon City Destruction Incident.

Rita was a critical part of Marvin Branagh's escape plan, as she was the only officer small enough to fit through the ventilation shaft that would lead her to safety away from the besieged precinct perimeter so that she could locate and send reinforcements.

Rita returned with Harry and his police van in time to rescue Kevin Ryman and two civilian survivors from certain death, although her other colleagues who helped orchestrate the plan; Marvin, Fred, Aaron and Tony, were all either killed or infected in the conflict.

Rita was very fond of Marvin, and was deeply saddened when they were forced to abandon him at the precinct. She is one of the very few surviving RPD officers.

During a normal game Rita is seen in the lobby early in the scenario working on the computer. The player can go up to talk to her by pressing X near her. With Kevin the Dialog is different. With the 8 Default characters, she can also be conversed with further via ad-libs. Playable NPC's however cannot do this.

Rita can be unlocked as playable in File #2: As a player character, she features a decent amount of health for her character type. Because she is an Alyssa type she can unlock certain locked cases and lockers. She is however slightly slower than average which may hinder her slightly. She can take potshots with handguns to take advantage of her 1.13x damage multiplier and she starts with a box of handgun bullets so she's able to reload right away when she needs to or give them to a partner that needs bullets. 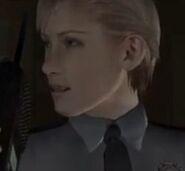 Retrieved from "https://residentevil.fandom.com/wiki/Rita_Phillips?oldid=622778"
Community content is available under CC-BY-SA unless otherwise noted.