watch 02:39
The Loop (Games)
Do you like this video?
For the character, see Robert Kendo.

Memory of a Lost City 1

Robert Kendo is a character file that can be found in Resident Evil: The Darkside Chronicles.

On the left light immediately in front of the main door in the Police station front entrance.

Japanese-American owner of the Kendo Gun Shop adjacent to the police station.

Perhaps it was because he freely handed out weapons to the remaining citizens, but after the outbreak, there were no good weapons remaining in the shop, and he wasn't able to successfully defend himself with what was left to him. Leon, who had just arrived in Raccoon City, witnessed him being attacked. He tried to save Robert, but was unsuccessful. 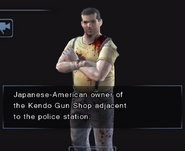 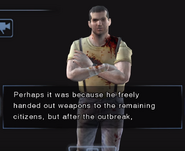 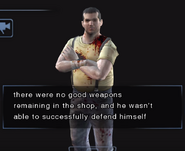 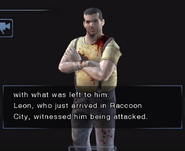 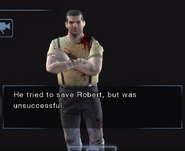 Add a photo to this gallery
Retrieved from "https://residentevil.fandom.com/wiki/Robert_Kendo_(file)?oldid=712169"
Community content is available under CC-BY-SA unless otherwise noted.