The workroom is a room in Resident Evil CODE:Veronica.[1]

A workroom in the prison complex where various objects are crafted from metals. Two metal detectors in the area prevent access to those who attempt to enter or leave with any metal objects. The building is connected to a storage warehouse accessed at the square in front of the guillotine.

In the hallway, a group of zombies bang on the window from outside. In the next area, there is a 3D Duplicator in the corner that can be accessed. The player is able to set up the 3D scanner portion. A short scene will trigger upon using it where the lid opens. No item can be placed yet. A set of Flame Rounds and B.O.W. Gas Rounds, a First Aid Spray, and the User's Manual file can be found on the work tables. Any items gained at this point cannot be taken out of the building and must be stored in the security box. The door to the south leads to the monitoring room.

After obtaining the Hawk Emblem

Once the player has obtained the Hawk Emblem from the monitoring room, it can be used with the 3D Duplicator's scanner. A short scene will trigger upon doing so where the lid closes and the machine scans the emblem. Next, it prompts the player to place a material to be duplicated.

After obtaining the TG-01

After the player has obtained the TG-01 from the briefcase in the cemetery, they can bring the item through the metal detectors. The TG-01 can be used on the 3D Duplicator to create the Sp. Alloy Emblem, a direct copy of the Hawk Emblem that can be taken out of the building. After stepping away from the 3D Duplicator, three zombies will break into the hallway through the windows. If the player carries a metal item through the metal detector and triggers the security shutters to close prior to this, the zombies cannot break through.

After accessing the second entrance

The 3D scanner lid is open.

The auto duplicator engraving the TG-01.

Sp. Alloy Emblem.
Add a photo to this gallery 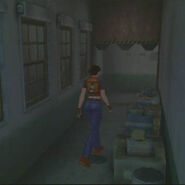 Retrieved from "https://residentevil.fandom.com/wiki/Rockfort_Prison/Workroom?oldid=796690"
Community content is available under CC-BY-SA unless otherwise noted.