Rodrigo was a native of an isolated village somewhere in Spain. He was one of the first converts to Los Iluminados following Osmund Saddler's revival of the religion. Rodrigo was also an artist, and his illustrations serve as crucial insight into village life before and during this conversion period.

Rodrigo was raised by his grandparents in a traditional upbringing in the village, permanently fixed in an early modern level of technology by cultural choice. Some time prior to 2004, Rodrigo was called by Father Bitores Mendez to a sermon led by the Prophet Saddler, and quickly converted to Los Iluminados. He was injected with a Plaga egg as part of a blood cleansing ritual, and was called upon to bring others into the cult, including his younger brother.[1]

A boy helps with the milking.

Per local custom, an elderly woman tells her grandchild about their folk hero, the 1st Castellan. 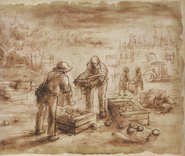 At harvest time, the villagers quickly take their crops to their truck to trade for supplies at market.

A man playing the guitar to entertain children at the harvest festival. 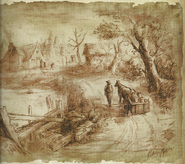 Rodrigo meets with his brother to add supplies to a horse-drawn cart.

Rodrigo persuading his brother to take part in the ritual.

Retrieved from "https://residentevil.fandom.com/wiki/Rodrigo?oldid=616571"
Community content is available under CC-BY-SA unless otherwise noted.