View source
watch 03:01
Wiki Targeted (Games)
Do you like this video?
Play Sound

Outside of the Resident Evil series, Smith is a widespread voice actor who can also be heard as Sonic in the Sonic the Hedgehog series, Ezio Auditore da Firenze in the Assassin's Creed series, and as Steve Rogers (Captain America) in many Marvel animated movies and television shows. He also works as an announcer for HGTV's series of Crashers television shows. 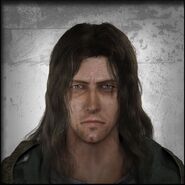