Ron Davis was a senator in the United States congress. He approved of WP Corporation's human test subjects to find the vaccine for the T-Virus.

Davis was on the committee that decided to bomb Raccoon City.

At Harvardville Airport, his presence was informed by the media which resulted in a protest outside the airport terminal. Forced to hide in the VIP lounge, Davis complained to a security guard to get rid of the protesters. To his annoyance, the guard pointed out that the protesters haven't done anything illegal. He, his bodyguards, a police officer, and his lawyer then tried to slip out through the regular exit, the senator wearing a cap in hopes of remaining incognito.

Unfortunately, Davis was quickly identified by Rani Chawla as "the bad guy on TV", causing a crowd of journalists to accost him. They were then interrupted by a protester dressed as a zombie tried to punish Davis with fear, but was revealed. Shortly after that, an actual zombie approached the group and attacked the police officer, killing him quickly, as several more attacked and killed both of his bodyguards and several people in the airport.

While everyone was at a panic, he was abandoned by his secretary, so he pleaded Claire Redfield to help him due to a back problem.

Ron, Claire, Rani, and a waitress headed to the VIP lounge in search of refuge. Two S.R.T. members; Angela Miller and Greg Glenn, along with government agent Leon S. Kennedy, came to their rescue after they rescued Davis' secretary. While the group was moving through the terminal, Davis separated from the group and ran ahead on his own being the first out. As the marines then began to purge the terminal of all infected, Rani was reunited with her aunt. Annoyed listening to the child's terrified whining, Davis insensitively told a nearby soldier how much he disliked kids. Hearing this, Claire walked up to him and slapped him, reminding that Rani is likely have nightmares for the rest of her life because of him.

While Claire and Leon were at the WP Corporation's headquarters investigating the attack, they uncovered evidence that Senator Davis was engaged in insider trading with the WP Corporation stock, of which he was a notable shareholder. Disgraced, he resigned his position. After the news broke about the WP Corporation being bought out by an organization called TriCell, Davis was murdered by parties unknown, and the data related to the WP Corporation on his servers was erased, as it was data incriminating TriCell. 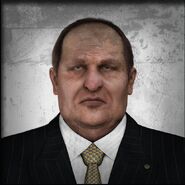