View source
watch 02:56
Raise a Floppa - The Loop
Do you like this video?
Play Sound
Prime universe
(Capcom's primary storyline)

Rosemary "Rose" Winters (ローズマリー・ウィンターズ, Rōzumarī Wintāzu?) is an American superhuman. The daughter of mutants Ethan and Mia Winters, Winters' body was comprised entirely of Mold, which was replicating human DNA. Following her rescue from an outbreak in Eastern Europe, Rose grew up in the United States under special protection.

Rose was born on August 2, 2020 whilst her parents were under BSAA protection. Due to the family's mutations as well as Mia's former ties to The Connections, they were at serious risk of abduction for experimentation or even assassination. While there is evidence suggesting they were moved repeatedly,[note 1] by 2021 they were living in a mountain range in Eastern Europe. At this point, Rose' existence was leaked through unspecified means, either through the BSAA or The Connections. When Mother Miranda, a mutant priestess from a nearby village, obtained this information, she abducted Mia and assimilated her DNA to take on her appearance. When this assimilation took place is uncertain, though the BSAA obtained evidence of the plot by Monday 8 February. Though the raid was initially a success, Miranda faked her death and was able to snatch Rose while the two were being transported.

In the early hours of Tuesday, the 9th of February, Rose was delivered to the Ceremony Site, the ruins of an ancient civilisation that once dominated the mountains. There, her body was crystallised and split into four fragments, with each held by Miranda's Four Lords for protection.[3] Miranda's plan ultimately was to reunite them after the Fungus Root below gained enough strength. Then, the parts were to be reunited with the Mold to return her to human form but altered to contain the replica consciousness of her long dead daughter, Eva, as a form of reincarnation.

Over the course of the day, Ethan Winters searched for his daughters' remains, having been fed information by both Miranda herself and Duke as to her location. Miranda however was able to take advantage of the situation after he disrupted an attempted assassination of her, and she was able to bring Rose back herself on the morning of Wednesday after the Fungus Root grew so large as to consume the village itself. Though Miranda had hoped to have her daughter back, Rose proved too powerful and resisted, using her own connection to the Mold to weaken her. Following the demise of Miranda, Rose was recovered by her father, who was slowly dying from his injuries. Renegade BSAA Captain Chris Redfield then found Ethan and Rose after rescuing Mia. Ethan, realizing that he was dying, tells Rose that he loves her, telling Chris to keep her safe. Despite Chris's protests, Ethan hands Rose over to him, telling him to watch over her, and teach her to be strong, before draping his jacket over Rose. As mold growths separate them, Ethan snatches the detonator for the explosives from Chris, before tearfully saying goodbye to Rose. Ethan then turns and walks towards the berserk Miranda, before detonating the explosives, leaving Chris, Rose and her mother Mia to be evacuated by members of the Hound Wolf Squad using a BSAA tiltrotor.

Since her rescue, Rose grew up under the protection, supervision, and employ of an unspecified organization. Her identity as a mutant was only known to security personnel and presumably other high-ranking individuals such as Chris. Some among them had come to nickname her "Eveline" in mockery of her origins, much to Rose's ire.

At some point, a teenage Rose was seen in a bus, on her way to visit her father's grave on his birthday, while donning his jacket. While reading the Village of Shadows, she saw a mother and daughter talking about a story book they were reading together, making her smile. Rose arrived to the cemetery to place flowers on Ethan's grave and to wish him a happy birthday. As she spent her time talking to her father, an agent that was a part of her security detail arrived after a brief search for her, having foreseen that she would be at the cemetery given the occasion. He tells her that she was needed, while jokingly referring to her as "Eveline". Enraged at the mention of the name, Rose grabbed the agent by his tie and threatened to harm him in ways that even Chris wasn't aware of.

As Rose stormed into the car, a nearby sniper was awaiting orders. But the agent ordered the sniper to stand down, stating he could handle Rose and she's "just a kid". Rose scolded herself for the outburst, but the agent affirmed that she's just like her father, a statement she proudly acknowledged. Though before they could fully drive away from the cemetery, they were stopped by a stranger.

Born from Mold-mutated parents, Rose has control over the Mold. Her ability surpasses that of Eveline and Miranda. Miranda speculated that Rose's unique parentage might be the reason for this. Even after she was split into her head, torso, arms, and legs, Rose was able to come back to life.

Rosemary and Mia at the ending

Rose is grown up and reading the picture book her parents used to read to her when she was young. She has a bouquet of flowers for Ethan's grave. Chris gave her Ethan's jacket.

Concept art for the prologue of Village where Mia is reading the picture book to Rose. 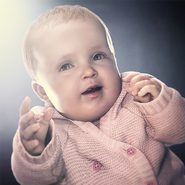 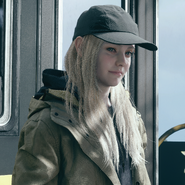